There were a group of five of 6 of us hanging around together quite a lot, we’d meet up for dinner, go on trips to the beach and the shopping mall, etc. At one stage we were even all wearing the same waterproof ponchos because we were getting rained on while riding our scooters. They were all bright green, in Luis Vitton and Burberry patterns…We called ourselves The Wolf Pack!

We had many adventures together but the one I am writing about today is our little outing to the Phi Phi Islands.

We took a day trip outing from the training camp that we were at called Tiger Muay Thai. The trip cost 1,600 bhat (June 2014) and included a pick up from Tiger, minibus to the ferry terminal, a speed boat day trip around the islands, lunch and transfer back to our camp. 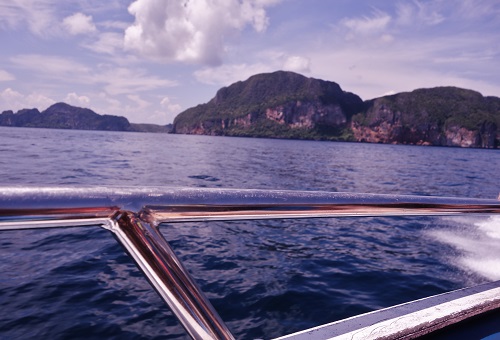 I was a little worried that this part of the journey was going to be really bumpy, but I needn’t haven’t worried because it was actually OK. The sea was very calm, but because of our speed we were jumping over small waves occasionally. It was best if we sat outside on the front of the boat I found so that I could see the land or horizon and not get sea sick.

They were incredible. The beaches were almost white, the sea in the bays where the beaches are were a beautiful green. The bays looked only accessible by boat as there were no obvious roads or pathways to get there and the surrounding areas of the island were near vertical rock faces covered in trees and other vegetation. It was like something out of a movie, which is more than a coincidence because one of the beaches was actually used for the film The Beach, starring Leonardo DiCaprio.

The only downside to this tour was the sheer volume of tourists who were on it. The beach was totally rammed with people and the boats were literally parked side by side along the water front. If you were there alone I can imagine that it would be a totally different and much more atmospheric. As if you were stranded alone on a desert island with no one else around.