On one of my first days down in Khao San Road I managed to have not such a big night out because I didn’t really like it down on that road and I was with a guy who I’d met along the street and I didn’t particularly want to hangout with after a little while. We were just very different so didn’t have that much in common to speak about, but sometimes it happens like that when you are travelling. So, I managed to get up at a decent time and head down to see some of the sights.

This was an amazing sight, with the reclining Buddha being the centre of the attraction. The number of buddhas around the complex was incredible, all decorated in different styles and colours. I got some really cool photos and I spent a lot of time playing around with my camera settings to capture them in different lights. It was fun. 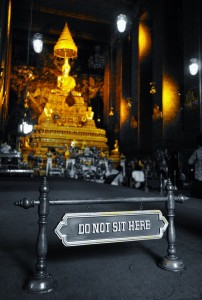 I attempted to see the Grand Palace, too, but I wasn’t wearing trousers so they wouldn’t let me into the palace unfortunately. I will have to save that place for the next time I visit, which I surely will at one point or another.