I was not originally planning on heading to Singapore because I had heard that it was very expensive and there wasn’t anything in particular that I really wanted to see there, apart from the F1 race but that was going to be a little bit too late for me to be there for that. But after meeting a new friend in Thailand, who lived in Singapore, I decided that on my way through to Bali I would make a stop over in Singapore.

When I was attempting to get through the arrival gates and customs, I had to state an address where I was staying but I couldn’t remember where it was so they wouldn’t let me through. They said that it was because of the recent outbreak of a reported Ebola case and they needed to have everything completed just in case they needed to contact me. Luckily I had the number of my friend who I was going to be staying with so I could call her and find out what the address was. 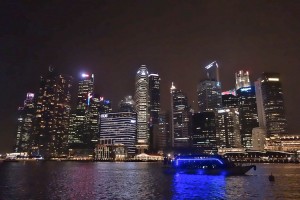 I arrived in the afternoon and went straight back to my friend’s place. She had picked me up from the airport which was very nice of her and not expected at all. We went out fairly early to get some food, drink and found ourselves out in Clarke Quay where there are loads of bars. A long island ice tea cost me $25 so quite a few drinks and it’s not cheap. The place that we went out to there was called Highlander.

There is also a great boat cruise that leaves from Clarke Quay and goes around the marina so you can see the laser light show that happens twice (I think) every evening. We got the boat that went out for the 9pm light show. The lights are bounced off the water from the Marina bay sands building. Definitely worth watching because it’s a great show.

This is an area of Singapore which contains a beach, Universal studios, shops and restaurants. The beach I think is man made and definitely has that feel to it. The area itself is really nice and, just like the majority of the rest of Singapore, is kept really clean and ordered. It is well worth a visit down there because it’s a great way to spend a Sunday afternoon relaxing.

I went on a walk around the marina with my friend. We walked past the Marina Bay Sands Hotel and through many different shopping malls. It seems that there are a large number of malls there, very much like in Malaysia.

Another shopping mall area was called Somerset 313, which is next to a small street called Emerald Hill. Somerset 313 is pretty large and new, and contains the usual mix of designer label shops, food outlets and everything you’d expect to find in a modern shopping centre.

Opposite the centre is Emerald Hill and just up on the right hand side is a bar called 5 Emerald Hill. It’s a nice place to meet for a drink which is exactly what I did. I met my friend Ryan who is Viatnamese but has lived in Singapore for many years. I had met him in India, Pondicherry earlier on in the year. It was good to catch up with him and see how his businesses were going that he had been talking about several months earlier.