Hervey Bay was to be my furthest point north on the east coast of Australia. I had thought about going up further but time and budget were two concerns. First, time because it was quite a lot further to get up to some of the more well known places such as the Whitsunday Islands and second was budget because I knew that all of the tours I would want to go on would be very expensive. Also, I only wanted to travel between places by road or rail instead of flying because I don’t like flying and the costs also add up.

My main reason for using Hervey Bay as a stopping place was because I wanted to do a trip to Fraser island which is a large island which consists of only sand. There are large fresh water lakes and forest on it, not to mention the beaches which act like super highways to 4x4s travelling up and down the length of the sandy land mass. They even have speed limit signs…Unfortunately!

When I arrived in Hervey Bay I had already booked up my hostel but I hadn’t booked a tour because the tour I wanted to go on to Fraser Island was full. It was called the drop bear tour and apparently you can take turns in driving the 4×4 as well as being accompanied in the group by 1 tour guide. Anyway, once I got to my hostel, which was called Flashpackers, I managed to get onto a tour called Cool Dingos.

I opted for the 2 day 1 night tour, although there was also the option for a 2 night 3 day tour. I’m glad that I took the first option because it was an intense and action packed, as well as drink fuelled, couple of days with early mornings and late nights. The driver of our tour bus was crazy and drove the bus around way faster than any of the 4x4s did and we even had to pull one out at some point.

We stayed in lodge style accommodation which was actually quite nice and the food served was high quality. I think the cost of the trip was around $380 which icluded all transport, accommodation and food for the 2 days so it wasn’t bad value considering what we did.

Having known not very much about Fraser Island but having been told how beautiful it was I was a little disappointed by the experience. It definitely has potential to be a great place to visit because there are spots on the island which seem untouched and very beautiful. However, we were on a tour bus with 15 people and there were at times actual traffic jams along the routes that we took so not so picturesque, untouched, deserted, desert island…

The fact is that as beautiful as the island is, sticking to the routes that everyone else travels is busy during holiday season. Also, the beach on one side of the island is actually a road. It has a speed limit with signs stating what the speed limit is with 4x4s driving up and down it all day long. To do that to a naturally beautiful place seems totally against what should be done in my opinion.

We visited lake McKenzie which is a very popular place. The water was fresh, blue and beautiful and the sand next to it equally lovely but unfortunately there were a large number of people there so it was actually difficult to find a place to sit down…I took the photo below at just the right moment in order to miss any people.

While going along the beach we were given the opportunity to take a flight over the island, albeit at an extra cost. It was $95 per person I think for around 15-20 mins of flying. It was in a small, 6 seater plane. I really enjoyed it and loved the take off and landing on the beach. Flying over the forests of trees made them look like broccoli heads and we were also given a perfect view of the lakes from the air. I’d definitely recommend doing it if you get the chance. 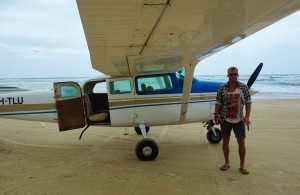 While I was in Hervey Bay I found out that it was still the migration season for whales from northern Australia back down to the Antarctic Ocean where they spend the summer. The female whales were with their calves, having given birth sometimes just a couple of months or so earlier. The female whales can produce up to 250 litres of milk a day for their calf and the calf can grow by adding up to 50kg in weight each day. The animals are huge.

We were guaranteed to see whales and that we did. We saw loads in fact, all over the place. One mother and calf even circled the boat many times as if in a showing off ceremony. From a far we were able to see some of them breaching, which is when they jump out of the water. It was a great sight and very nice to see.

Opposite where I was staying there was a burger shop called Katmanzoo Cafe on Denmans Camp Road. I went there several times during my stay because the owners were super friendly and made a really nice burger. Sure, it’s not the healthiest food around but they added lots of salad and the burgers were not greasy like some you get. The couple were always making sure that I was happy with the food and went out of their way to provide a great service and I really appreciated that. I’d highly recommend visiting them if you get the chance.