Darwin was to be my first port of call in Australia and I had never been to Australia before. When I got off the plane I was used to being in other SE Asian countries so got a taxi straight to my hostel. It wasn’t far, just 4km away, but that cost me $30! That was a sign of things to come throughout my trip around Oz.

I stayed at a place called the Youth Shack hostel. If you go there, you can get 7 nights for the price of 6 if you book directly with them but if you book any of those nights online you can’t get the same deal, I found out to my dismay…It’s a weird hostel because, unlike any other that I had been to before, there were a high percentage of workers there. People who worked full time and lived in the hostel. A lot of people worked at the hostel itself because it was a large operation so required a large number of staff to keep it running smoothly. I found that there were a large number of Irish workers there because there was a high demand for building and construction workers.

Everything in Darwin was expensive for me because I had just come from Bali, but even so I did find that compared to the rest of Oz it was also quite expensive. Hostel rooms were around $32 a night and there were only several options to choose from, all in the main town. Food was not cheap, either, with kebabs costing around $12 and a meal in some places costing at least $18. However, I did find that in one sushi place you could get a plate of salmon or tuna rolls for around $6 which was pretty cheap and quite healthy.

There is only really one main street in Darwin, as it’s a really small town/city. The main street is called Mitchell Street and this is where you will find all the bars, hostels and main shops. There are a few on the streets further back but nothing much really.

Things to do in Darwin

A lot of people are working up there so it’s a massive weekend place for going out, although you will find a lot of people out in the week too. The weather is hot so everyone loves a beer or two…I was there in September and it was up to 35 degrees. Some places that I visited when I was in Darwin were:

Cullen Bay – This is a nice place to watch sunset and go for a walk along the beach. It’s about 3km away from Mitchell Street and a relatively uneventful walk. It’s kind of like a small complex of more expensive apartments and houses, with people who have yachts and boats around the area who can easily live next to them. It’s nice to watch sunset with some fish and chips from the shop there which were only $3.

Waterfront – there is a man made beach here which has nets around it under the water to prevent fish and sea life from getting in. It’s really nice around there and good for sunbathing and taking a dip when it’s hot outside. You have to be careful in the sea because there are deadly jelly fish. But if you get stung apparently vinegar is a good solution to treat the stings. Crocs have been known to be around the area, too, so watch out…

Night Market – Mindil Beach sunset market is a great place to go for some food. Out of all the stalls there at the market, I think about 80% of more of them are for food. They have stalls selling food from around the world so you have loads of options. You can also pick up some souvenirs, like shark and crocodile items.

I went on the Croc and Litchfield day tour, which was excellent. It was called the spectacular jumping crocs tour and 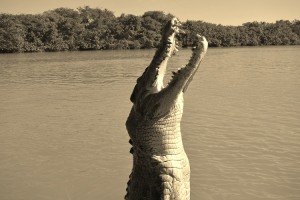 it was spectacular. I loved it. We were on a boat going down the Adelaide River and the workers on there were dangling food overboard and getting them to jump. What I really liked about it was that they seemed to have a reason as to what they were doing in order to keep the crocs wild and not allow them to get too lazy and wait for the boat to come along and have the food from it.

Some facts about crocodiles that I found out were:

– Can go for up to 4 hours underwater on one breath
– 6.8 meter hannibal the cannibal crocodile
– 100 years old, over 1000kg
– Can slow heartbeat to 1 bpm when injured or underwater for long time
– Can’t get infections
– May lose all limbs and still be ok, just tail and teeth are important
– can last up to 12 months without food

As part of the tour I also went to Litchfield national park. It was 1.5 hours drive away from Darwin. We visited some places, such as Buley rock hole and Florence falls. It was 135 steps or 1.1km trail down to Florence Falls from the car park, so you had a choice of which route to take.

While we were driving through we stopped off at some termite mounds which were 5 metres high. Looking at them 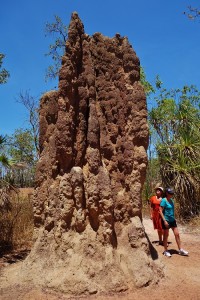 you would think that they were just made of soft mud and might come down an moment if hit, but they are nothing like that. You can hit them as hard as you like and it’s more likely to hurt you than it is for you to do any damage to them. There were two types of termite mounds that we saw, magnetic and cathedral types. They are huge and really unbelievable. Apparently they are made so that the termites can stay in them, above the water level which rises up high in the rainy season.

After my trip to Litchfield, I went back to Darwin, stayed another night or two and then left via plane to head down to Alice Springs for the next leg of my journey.