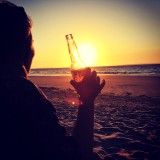 Moving on from Hervey Bay I came back down the coast to Brisbane for just 1 night and then left early the next morning to get another Greyhound bus down to Byron Bay. I didn’t look to spend much time in Brisbane because I had heard that it was not that spectacular and to be honest I wasn’t looking to spend that much time in the cities any longer because that wasn’t what I came travelling for.

I had decided upon Byron Bay because I had heard from many people that it was a beautiful place and one area that I should definitely visit.

Note: A small side note about taking the Greyhound buses is that during the day time if you catch a bus you will often get two seats to yourself because they are not very busy. If you take the bus at night, however, it’s very often full of people because they are saving a night on accommodation and they also don’t want to waste the day. To be fair it’s probably more likely that they are saving money on a night of accommodation because it’s generally backpackers who are the ones using the service.

So, I arrived in Byron and walked to my backpackers hostel which was a Nomad’s place I seem to remember. The hostels in Australia are properly large businesses, run exactly like businesses. There is no personal touch from an owner of a small business who treats you very nicely because he wants your return business and because he has a passion for what he does. No. The staff are mainly travellers themselves getting free accommodation for working several hours a day. They don’t really care about you coming or going so just get on with it. That’s the general feel I get from the hostels in Australia, although there was one notable exception to that down in Melbourne but that’s for another post.

I could walk to the hostel from the bus stop because it’s just a couple of hundred metres away. The hostel itself was clean and had everything you needed. They had a large communal area and a decent sized kitchen. The first day that I arrived I noticed that they had a free lighthouse walk arranged for that afternoon so I went on that to see what it was about and try to make some new friends.

There were around 5 of us on the walk. We started at the hostel and walked along the road through the main town of 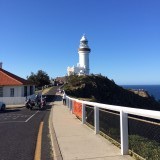 Byron Bay and to the beach front. Then we turned right and walked along the beach path and continued to walk parallel to the beach until we came to a road which had a pedestrian walkway running alongside it to take you up the start of an incline towards the lighthouse. The road wound around the hill for quite a long while it seemed, and for a lot of it we just followed the road way. Upon turning the last corner to the flatter road towards the top we were greeted with a great view of the sea.

We spent 10 minutes looking out dolphin and whale spotting. We saw around 20 or so dolphins, a few whales and 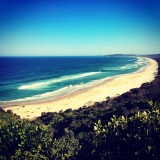 quite a lot of surfers. With my inexperienced eye, it was difficult to spot the difference between a dolphin fin and a shark fin so it looked like the dolphins were sharks and about to attack some of the surfers.

From the top the path continues around and past the lighthouse and then down the other side which is through forested areas and towards the shoreline. We went to one of the small beaches which had no one on it and we were supposed to watch sunset there but the guide had forgotten that the clocks went back one hour so we were actually one hour ahead of time…Instead we continued to walk along the beach back towards the main Byron Bay area and the hostel.

One day I decided that I needed to go for a run to keep at least a little bit of fitness up while travelling around. I went in search of the fitness trail that I had seen part of while on the lighthouse walk. It was easy to find and along the route there are some fitness stations, equipment like chin-up bars, dip bars and other exercise stations are positioned at various intervals along the route. That’s one thing I love about Australia, it’s really geared up to get people active and outdoors. In any of the cities that I visited I was able to find people skateboarding, surfing, running, walking and generally being out and about. In addition to the fitness types of trail are the free bbqs that you find in nearly all parks. They are topped up with gas and you can use them whenever you like just at the press of a button.

I really liked the town itself because it was small and had the feel of a place that had not been spoiled by commercialisation, such as lots of starbucks and McDonalds all over the place. In fact, I was told that there are laws that prevent those kinds of large scale companies from setting up shops in that area which I think is great.

The other funny thing about it is that there are some seriously strict drinking rules in place. According to the guide on our lighthouse walk tour, who was also a barman in the evenings at a local bar, the rules that he told us about were almost unbelievable. Rules such as if the bartender sees that you have downed a drink he has to give you a 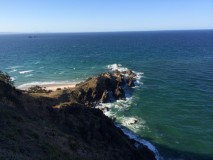 warning and if you get two warnings you are thrown out. They are not allowed to serve shots of alcohol to anyone and no one person can buy more than 4 drinks at a time. My understanding is that this is because Byron Bay is a place that loads of Australians go to during the holidays from school and college and get really drunk which has lead to some bad fighting and general behaviour.

Apart from that the feel of the place, I did notice that there are a lot of what I call pseudo hippies around there. I call them that because they dress and want to be like hippies but they are not really like that at all. They are just travellers mainly, who want to be in the cool gang. I have nothing against that but I’m not the long haired, surfer looking type that dresses in those ways so I did feel as if I didn’t fit in that well. It came across as quite pretentious in many ways but I could be wrong. Maybe that’s what I projected onto the people that I saw because of my own opinions.

Note: One bar I went to on a night out was called Cheeky Monkeys and was quite good fun where they play drinking games where you can win prizes for winning but it’s very “club 18-30s” in style. It reminded me of when I used to go on holidays as a young 20 year old to places like Zante in Greece where everyone was getting really wasted and playing all kinds of games. But then again I guess that’s what a lot of the people there want to do because the age range of people who go there is quite young.