I flew down to Alice Springs from Darwin. I had wanted to take the Gahn Express down but when I finally got around to booking the ticket I found out taht it was around $450 and a flight was $230 so it was a no brainer, especially when getting the train would have taken 21 hours…The airport in Alice Springs is very small so it was very quick to get in and out the other side.

I got the airport shuttle bus from the airport to town this time because I knew how much a taxi was going to cost from my previous experience in Darwin. I planned to meet a good friend of mine who I knew from back home in England who lived in Australia and has permanent residency there. The plan was to go out into the wild and do some camping in the outback.

I had found myself a friend to head out into the bush with because there was not enough room in my friend’s 4×4 for me to jump in with them because they were moving house and had everything in their car. I got a Hyundai i20 car from Wicked Campers for $375 for 3 days and 2 nights. The guy who rented the car to me was really nice and helped me out massively by letting me come back late and pick it up early so that we weren’t as rushed on the drive.

We had initially planned to leave one day but my friend had a breakdown on his 4×4, the starter motor broke, so we had to postpone until the next day. Somehow he managed to find a spare part and get it fixed all within the same day that it broke.

This was our itinerary for the road trip which lasted for 3 days and 2 nights:

Day 1 – Drove to the Olgas, 500km, walked around for 2 hours, drove to Uluru for sunset, camped out at Uluru resort which was very touristy and cost $38 dollars for two people on one site and $16 for each extra person. $25 for park entry fee to Uluru.

Day 2 – Got up at 0500 and drive to sunrise point. I think sunset point could be better because of the backdrop with sunrise. It was very busy, lots of people. Drove to the camp site which was free and located around 50km up the road towards Kings Canyon from the Lasseter Highway.

This camping experience was the best I have ever had. The view was genuinely amazing with no one else around apart from the 4 of us. We had a camp fire and cooked a roast dinner under the stars. From the picture below hopefully you can see just how incredible the sky looked. I have never seen anything like it. I didn’t realise that you could see that many stars in the sky. 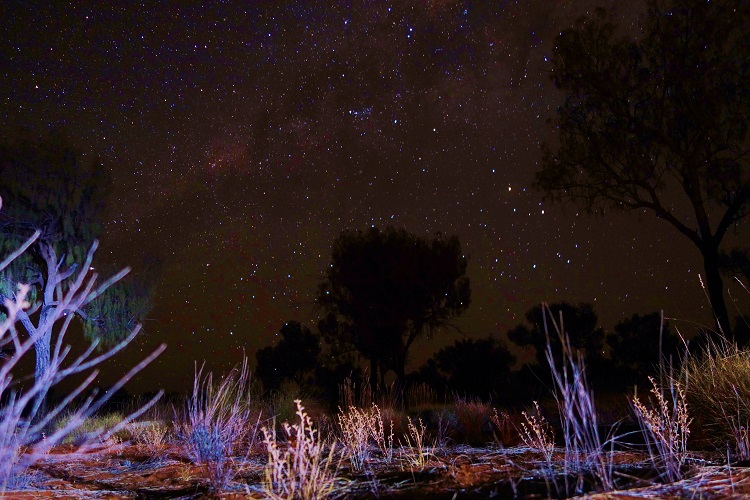 Day 3 – We got up early to get to Kings canyon to do the rim walk which took just under 2 hours, with taking photos and not rushing too much. Drove back on the road from there to Alice Springs, 500km.

Petrol is expensive anywhere off the main Stuart Highway. Normal price was $1.75 per litre and went up to $2.08 near to the Olgas and up to $2.30 at the maximum price that I saw so make sure that you fuel up at the cheaper places and have a large petrol tank.

We did a base walk around Uluru, which was formerly called Ayers Rock. The reason for this is because originally the rock was named Uluru and is the original name but when foreign settlers came to Australia and decided to take the land away from the aboriginal people they changed the name of the rock to one of the finders.

The walk was 9km in total and was pretty good but also quite hot and this was at 7.30 in the morning until around 10am so if you start any later than that it is going to be super hot in the middle of the day and early afternoon.

Walking up The Rock

I had decided that I wanted to climb Ayers Rock, even though it is considered to be against the wishes of the aboriginal people because they see it as a holy place. I understood that but I have wanted to climb it ever since I was a child and there are ropes that allow you to climb it so I decided that I would…When we first arrived there it was closed off due to high winds but later on, after the base walk around Uluru, it was open so I took the chance.

I thought that it was just a short climb up to where the metal chains stopped so I went very fast up that first section. Unfortunately I was mistaken and I had actually only reached about half way. I think it took me about 11 minutes to get up the first part and then another 15 to get up to the top. The 2nd section is nowhere near as steep so there are no ropes attached to help you climb.

I stayed in a hostel called Alice Lodge Backpackers. It was a short walk to the town so in a good location and was OK. The atmosphere was quite nice and everyone was friendly. On Saturdays they had a free BBQ with sausages and kangaroo meat which I had not tried before and I found it to be pretty tasty. The place had some longer staying residents who lived in small, permanently set caravans in the garden area. Although the place was in need of a good clean I liked the people there and the way that it was done so I would recommend staying there.