A friend who I have known since I was around 5 years old from back home in England left to travel around 5 years ago. He travelled around a lot of places and eventually settled in Kuala Lumpur for work. Knowing that I would be out in Thailand I thought it a great time to go and meet him and also see another place at the same time.

On the 15th July 2014 I took the flight from Phuket down to Kuala Lumpur, with a return flight booked for the 30th July, which gave me around 2 weeks there in the city. Upon arriving at the KL terminal with Air Asia, I immediately noticed that it seemed to be a little more developed when compared to all the other places that I had been to. But then again, maybe this was just because the airport terminal was new!

I got a taxi straight down to my friend’s place which was near to the Swiss Garden hotel in a place called Pudu. This was conveniently located very close to one of the main areas that you would want to go out in called Changkat. Every Malaysian person that I had met so far spoke very good English. I assumed it was because they were dealing with foreign people everyday and also because they lived in the city. The taxi ride down took around 45 minutes and cost 100 Ringgit, which was a little overpriced because apparently a standard taxi on the meter should cost around 80 Ringgit. This converted to around £16 at the time.

Cost of Living in Kuala Lumpur

Apartments to rent near to the Changkat area are around 3,000 – 3,500 Ringgit per month (August 2014) which equates to around £600-£700. This gets you a 2 bed, new apartment on a high level floor (15th to 23rd) of a new block with 24 hour security. I thought that was pretty reasonable, especially for what you get. The views from the bedroom windows were great and you could look out over the city. At night time it was really nice.

Going out to eat and drink was a little more pricey than I had expected. A pint of beer in one of the trendy bars was around 25 Ringgit. Whenever you see a cost with ++ next to it, that means you have to add tax and service charge to it. Tax is 6% and service charge is 10%. So, your pint of beer now costs you nearly 30 Ringgit which equates to around £6! That’s very expensive. A few drinks, whether it be beer or spirits, and some food will end up setting you back quite a large amount. Probably the same cost as going out in London to be honest. That dented the budget quite heavily.

You can pick up some fake and cheap items of clothing, like boxer shorts, t-shirts and other basics from the markets that they have around the area so that’s not too expensive but as soon as you head into the shops you are looking at normal prices for these items.

For some reason the Malaysians love shopping malls. I think I saw an advert for Kuala Lumpur where they quote that there are over 30 shopping malls in central KL and that doesn’t surprise me. When walking around the city we were ducking in and out of various malls, both old and new, in order to use it as a air conditioned short-cut on our way to another area.

There is a street called (I think) Petaling street which is well known for selling cheap goods, usually fake, and food items.

Going Out in Malaysia, Kuala Lumpur

I went out mainly to a place called Changkat and I stayed quite a few nights there that part of town, too. It’s not exactly the nicest of areas because at night there are people drinking and eating at portable, road side burger bars but it’s close to everything and there are plenty of sleeping options. The cheapest one I found was a place called Havana which was down the end of a small street. It cost me 55 ringgit a night and that included breakfast, not that I ever got up in time to have it…

Before that I stayed at a hotel called Hotel Rae. It was a little nicer and larger than Havana but it was double the price so definitely not worth it. Also, for that price the room had no windows so it can get a little claustrophobic and cause some cabin fever!

I stayed at one more place called the Star Hotel I think it was. This was a bad place to stay for two reasons. 1) It was more expensive than Havana but around the same quality. 2) The people who worked there made a lot of noise overnight and there was no door between them and where the bedroom doors were so it was very loud at night and I couldn’t sleep properly. All of these places are around an area called Tongkat Tong Shin.

Batu caves – from Kuala Lumpur terminal to Batu Caves directly was 25 mins. Trains leave every 30 mins during the day. You arrive right outside Batu Caves. There are around 280 steps to the top. Inside the main area there is not really anything there, just a cave. There is a dark caves tour but I didn’t go on it because I was sweating, hot and didn’t really feel like it. Be prepared to get very hot and sweaty so don’t wear a shirt! Ladies, you have to wear something that covers your knees or you can buy/rent a wrap around skirt on arrival. 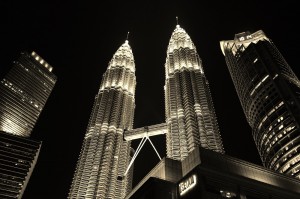 Petronas Towers – I didn’t go up them because to quote Karl Pilkington “I’d rather be in a save looking at a palace, than in a palace looking at a cave”. Which translates to me going up the KL tower and other sky bars, as mentioned above, to look at the twin towers rather than the other way around.

KL Tower – This was really cool to go up. There are different levels to it, so you can go to the observation deck or open deck. I went to both because I bought an open deck ticket which is more expensive and higher up, then went down to the observation deck afterwards. On the open deck it is what it says, open. There are waist level protective glass areas but that’s it. You can see over the entire city so go at night because the views are great.

The observation deck is enclosed with glass. It’s nowhere near as good as the open deck in my opinion, but it does have some high powered binoculars that you can use to look around for free. You can easily see people working in the twin tower offices, they are super powerful.

KLCC Park – I went around the park in the day and at night time. For me the night time experience was the best. I walked through and took some pictures of the twin towers. One night I was there and they had a show on in front of the KLCC shopping centre (which is the building underneath the towers) with music which was quite nice to watch. If you walk up and around onto the higher area of the grass you can get some nice shots with no one in them. Just watch out for snakes as while I was setting up my camera on the ground I saw a baby one moving along.