It wasn’t until I arrived in Bali that I started to learn a little bit about what other activities there were to do. The ones that were mentioned by all travellers were Ubud and the Gili Islands. The two American guys that I met in the Bed Bunkers hostel, which I talked about in a previous post, and me, along with a German guy called TJ, all decided to head up on our scooters to Ubud for a couple of nights. Those couple of nights turned into 3 long nights…

I had previously ridden my bike through India and Nepal for 4 months so I felt confident riding and I also knew that in most places in SE Asia it was possible to bribe the police if you needed to. It is the same in Bali, but the bribes are higher when compared with India. Also, I didn’t have any problems not having an international driving license in Thailand. When I got stopped by the police they accepted my UK driving license without a problem and allowed me to continue, but not so in Bali.

Anyway, to cut a long story short we got stopped and fined 250,000 each on the way up to Ubud from Kuta. We negotiated down from 500,000 each but he wouldn’t have it to go any lower unfortunately. With hindsight we should have taken more of the back route along the smaller roads. You could tell that the cops were waiting for tourists like us to ride along so they could pull us over and get a nice bonus for their beer fund.

We had been told to stay in a place called “In Da Lodge” which at first sounded a little bit hip, but when we eventually arrived after a lot of messing around with directions because it’s located up a steep ramp from the main road, we discovered a real hidden little gem. The entrance to the place was a very narrow set of old, wooden doors with a metal knocker on it. The door was set in the middle of a weathered wall, which barely came half way up the frame so you could easily see over it. There were 3 superfluous steps leading up to the door. 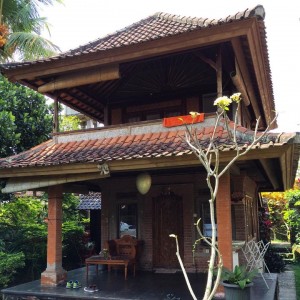 Upon squeezing through the door, which I had to do sideways, I was greeted with a narrow pathway which lead over a small concrete paved bridge alongside which were some very well kept lawns and flower beds. Hanging among some poles within the garden were hammocks. The path continued along past more hammocks and the start of some buildings, which all had overhanging, slate roofs below which were the steps and a small tiled area along which people kept their shoes.

We went up to reception half thinking that we had come to the wrong place or that it was going to be very expensive to stay there. We were wrong on both counts. It was the right place and it wasn’t expensive to stay there, just 100,000 ($5) for a hostel bed but because there were 4 of us we were able to take the family house, which contained a double bed upstairs and two bunk beds downstairs, plus our own bathroom. It was super cool.

While in Ubud we went out all three nights and we drank at the bar in the late afternoon and early evening at the hostel. I all it a hostel but it was more like a hotel standard of food, bar service and places to relax on. They had large sofas which were easily large enough for two people to lie next to each other and there were a lot of them in squares with large tables in the middle. The bar served cold beers and good food, like the classic nasi goreng.

In general Ubud doesn’t seem to be a place where you would regularly go on an all nighter because it seems much more relaxed than that. However, there are a couple of places that we went to alongside the football pitch area in town. One place was called the XL Shisha Lounge and it was open until 2am so that was a bonus, they served shisha there, as the name suggests, and had beer towers. It was a cool place actually and they had live music one of the nights that we were there.

It’s a very chilled out place and there are a large number of people who go there to practice yoga and meditation, and I assume that there are many retreats there for this purpose, too. Because of this it’s easy to find vegetarian and vegan food places. We stopped off at one down a smaller road off the main street which was called Warungsopa. The food was very nice there and I really enjoyed eating it, plus the atmosphere was very relaxed and chilled.

Things to do in Ubud

Monkey Forest – A forested area which is full of monkeys. They seem to have feeding areas to keep them coming back so I’m not sure that it’s a totally natural monkey forest, it’s just an easy meal for the monkeys. The have banana sellers there but be warned that if you buy some you will get jumped on immediately so have your camera ready! 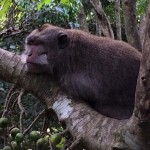 Volcano Sunrise Trek – I didn’t actually do this because I had injured my knee but the other three guys I was with did it and they loved it. It started with a collection from the hostel at 2am and they got back around 4pm. The pictures that they had were amazing.

Rice fields – From Ubud you can ride around 15km to a place called Tegallalang which is a more hilly area and, as such, is home to many rice fields all terraced along the hills. It looks spectacular, especially at sunset. It’s well worth the trip up there. In fact, at one point along the main road you can go and have a drink at one of the coffee shops overlooking the fields or just grab a beer from a local shop and sit down on one of the unused balcony areas which are down a few steps just off the road.

Market – There is a market in town which is worth a look but to be honest it’s nothing special, it’s just another market with the usual souvenirs for sale.