We decided to head up to the Gili Islands for a couple of nights. I needed to be back in Kuta because I had a flight to catch on the Monday down to Australia, but the other guys, Izzy and Joseph, had no definite plans so could return when they wanted to. We caught the boat up to Gili T which is where I stayed for the next 2 nights.

There are no motor vehicles allowed on Gili Trawangan, which is nice, so instead there are a lot of bikes and horse and carts for transporting larger items around. When you first arrive on the island you just jump off at the beach and have to walk up the sand to the little street that runs along parallel to the sea. There are a lot of people around there asking for you to stay at their place, which isn’t necessarily a bad thing but just make sure that you are getting a good deal.

The price of accommodation varyies depending on what you want and where you want to stay. We managed to get a room to ourselves with 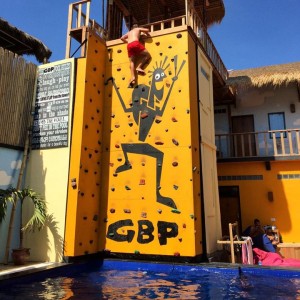 an attached bathroom for 150,000 a night which is around £8. But we also stayed in a place called Gili Back Packers which was a lively hostel, with a swimming pool, climbing wall and loads of drinking games each night. It was a cool place to hang out and meet people but you didn’t have to stay there to take advantage of the place, you could easily stay somewhere cheaper and then go there in the evenings. That’s what I would do given the time again.

Overall, Gili Trawangan (Gili T) as it is known, is a large party island. I’m quite sure that there are other parts of the island which are less busy, more scenic and less party prone. It really does get pretty messy down around the main areas on an evening.

The aim of the GBP (Gili Back Packers) hostel is to make the place as much fun as possible, which is one reason why they have the climbing wall next to the swimming pool. They also put on loads of games at night like beer pong and cup flipping races.

We had paid 550,000 rupiah for the return journey from Kuta which I thought was a pretty good deal considering you got a door to door service. That was around £25 at the time of writing (August 2014).

On the way back the boat ride was horrible. It was really rough and I was stuck right next to a window downstairs. Water was seeping through the window frame and there was nothing I could do about it. Not only that but it would start to open slightly every time we went over a large wave, which was pretty frequently. I was sweating and getting wet from the water so I came out soaked. It took around 1.5 hours to get back.