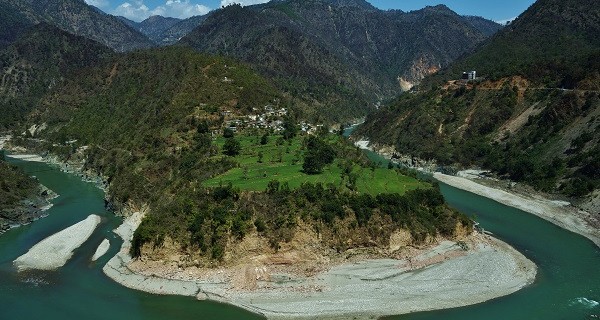 The next leg of my journey I knew was going to be tougher than the previous because I was heading high up into the mountains, along smaller roads where landslides were common as were blocked roads. However, I didn’t realise that I would be stuck up a mountain.

I planned to ride from Rishikesh to a place called Dungari. I had no idea if there were going to be any guest houses there but I had looked up online and seem many places located in remote locations so I assumed there would be, but I was wrong. I got to Dungari and rode straight through. Part of me was happy because the roads and riding conditions were amazing. There were few cars on the roads which wound through the mountainous areas along, mainly, smooth roads.

Part of me thought about trying to make it all the way to Munsyari which would have been 400km in total. I knew that my average speed was around 30kph so that would have taken all day. Unfortunately, the weather made the decision for me. I was passing up and over a mountain when I saw that the clouds were gathering. Very quickly the sky went from sunny (I had even taken my base layer off) to dark, cold and cloudy with rain threatening. Then the thunder started. Then the lightening in the distance.

I continued as I had no other choice. I had not seen any guest houses for a while so wanted to make it to the next larger town with some place to stay. I had no waterproof gear really, not to wear anyway. I had a leather jacket, jeans, thermal trousers underneath for warmth and some leather boots.

I had to stop because it started snowing…I took cover under a tree thinking that it would stop soon, but instead it got worse. There was a halestorm, really heavy rain, snow, wind, thunder and lightening. It was not looking good as the cloud continued to remain overhead. It was 4pm when I stopped and I was waiting for 1 hour and there were no signs of it letting up.

I had used a waterproof cover for my bike but that had gathered heavy snow on it and come off so my main bag was getting wet. I didn’t see it happen because I was taking cover under a shelter nearby as the tree was not working too well. I had to make trips back and forth to check on the bike and then take shelter again. I didn’t want to ride the bike down there because I thought i would get more soaked. It’s funny in those situations where you have to make decisions, you’re cold and wet and tired and often the decisions are not what you would make if you were warm and clear headed.

I was a little worried as I was taking shelter under metal roofed sheds with high, metal poles next to them for electricity. Probably where the lightening would strike first? And I was at the top of a mountain. I was next to some houses and a military training base, but there was no sign of action from anywhere.

After 1 hour I decided that I needed to make a go for it. I couldn’t use my phone properly because my hands were wet and so was the phone so the screen couldn’t interpret my finger swipes. I had no way of getting it dry because everything was wet. I made a dash back to the bike and folded the waterproof cover over my main bag, put on my helmet and gloves and rode off. The spray was ridiculous. It was coming up to my seat level at times as I went through large streams of water which were running off the mountain. I was limited to a max of 40kph which even then was a little too fast, so I stayed at most around 30kph.

I was happy to see that I was only 18km away from a place called Baijnath which I hoped had somewhere to stay for the night. It took me a while to get there and I was shaking uncontrollably when I arrived. I found the only place in town to stay and took a room for 800 rupees a night.

The guy at the guest house asked me to put the bike up next to the restaurant which was up a really steep and narrow ramp. I was cold, wet and not keen on doing it because I knew the ramp was too steep for the bike. I couldn’t get a good run up because the ramp was not even and too narrow to hit it at speed. I got as much speed as I thought possible and hit the ramp but it was no good, I gradually lost power and speed and got stuck half way up the ramp.

Leaning over to the left hand side against the wall while still keeping my right foot on the back brake and right hand on the front brake, I held the bike there perilously close to falling off the ramp. The guy just watched me telling me to “start the bike again”. It was not possible because I would have to kick start it with my right foot and the bike was slipping back if I did not use both brakes. I had to ask him twice to come nd help me…I don’t think he wanted to get his hair wet.

He pushed from behind while I started the bike and, while slipping the clutch and giving high revs, I managed to crawl the bike up the steep slope and onto the flat area.

This was the name of the guest house. It was quite nice actually and the man running it was very helpful. He got me a heater because I wanted to try and dry out my clothes and boots. In the process of drying them I burned one pair of pants, a pair of shorts and my boots…The boots melted a bit and the clothes had brown, burn marks in straight lines where I had laid them across the heater. Still, the pants were only 80p so I could throw them away and that saved some washing!

I had noticed the night before that there was a lot of noise coming from nearby. Apparently there was a temple and they had some ceremony going on where people were singing and dancing. It stopped at around 10.30pm so that was good. Unforunately, it started again at around 5am…This was just music though and it was really loud. far too loud, so I had a really disturbed sleep.

I got up and packed my luggage which took a while as I had take everything out to dry it. Not everything was dry though still. That’s when I burned my clothes in an attempt to speed up the drying process.

The manager/owner helped me to load my bike and luckily I asked him the best way to Munsyari. I was going to use Google maps to head there and the route I had in mind was apparently a bad one. It was shorter but much harder with dodgy road conditions. So I opted for the route the manager suggested which was along main roads. The roads were actually amazingly smooth and well maintained and the ride was superb in the early morning sunshine.

My next stop was Munsyari which was at 2,290m above sea level. I was suprised how long I went and how close I got to Munsyari before I started to climb, which meant that it was going to be a steep ride. I was right. The road continued around switch back bends and traversed its way up the mountain for what seemed like infinity. It was really nice to ride along, if a little scary at times because there are no barriers and sheer drops off the sides of the cliffs.

At times I had to change down into 1st gear to make it around some of the sharp turns on the roads and in preparation of the poor surfaces which I had to go over, with running streams and cobbled paving made from loose stones where landslides had broken the road surface.

The views from the top of the mountain were something very special. There was snow on the ground and I could see where I had made my way up the roads though the valley and over the mountains. Munsyari was actually lower down than the peak, sitting in a small valley area with amazing views of the Himalaya mountain range in the distance.