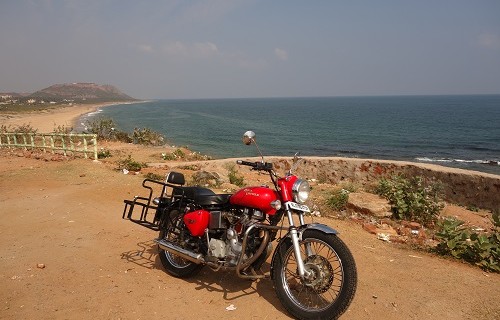 I was headed back to the coast as I made my way from Vijayawada to Visakhapatnam so I was expecting a little more beach time. Although as I have been up the coast on the Eastern side of the country I have been very reluctant to head out onto the beach and into the water for a few reasons. First, the beaches and water are really dirty. There is rubbish, broken glass and even human waste dumped on the beach…Second, most of the people are fully covered up in clothes so going there in just some swim shorts would make me look a little out of place. Third, I would get a lot of stares and people coming up and asking me questions and just staring at me which makes me feel a little uncomfortable. I now know what it must be like to be a girl who gets a lot of unwanted attention…

I made my way to the beach road because I had read in Lonely planet that it’s where all the main hotels are. How wrong they were. There was a large, expensive, 5* looking Novotel hotel which I didn’t want to stay in because it would have been too expensive. so I kept on riding and moved away slightly from the beach road as I thought there would be some cheaper places. I found one and stayed there. It was only 800 a night for a pretty decent room but there was a broken antenna on the wi-fi router so it didn’t really have internet unless you sat next to the router. There was a cheap little food stall there that sold noodles for only 90 rupees and delivered them to the room so that was a good bonus and kept the costs right down.

I visited a submarine which was docked on the beach front. It was a Russian submarine that had been bought by the Indian army in 1969 and used right up until 2001 when it had been decommissioned. The insides of those vessels are amazingly complex and condensed. The piping and cabling is all over the place and the sleeping quarters just as cramped. It would get very claustrophobic being down there for months at a time.

I visited a site high up on the hillside called Bavi Konda Site. It was believed to be in use from around 300 BC until 300 AD by monks who lived and meditated there. It was only discovered fairly recently, and there area had not been fully excavated even when I was there so they were still uncovering areas and artifacts. It was very peaceful with no one else looking around at it while I was there.

As I was unsuccessful in my previous attempt to get a service I asked the hotel manager who was very helpful and spoke excellent English. He seemed genuinely honest and told me about a few places, one of which he had not used but was the closest and was a Royal Enfield garage. With that in mind I visited the place that day in the afternoon. They guy appeared to be a mechanic and they have several Enfields outside, looking very shiny and ready for sale. It didn’t look as though there was much of a workshop, but I didn’t think much to it, but I should have read those early warning signs. I had actually thought that I’d found the first mechanic in India that kept a very clean and ultra tidy workshop, with no oil on the floor. 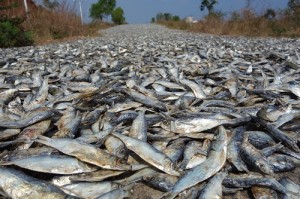 After the supposed mechanic phoning his boss to come and look at the bike and see how much it would cost for a service, and the boss man taking my bike for a ride, he said that the full service would be 2,000 rupees. Having not had a proper service before I got him to lower the price to 1,800 and thought it would be a good job. At first they wanted me to leave the bike with them until the next day but I said that I needed it that evening and would bring it back in the morning and wait with it until the work was done.

The next morning I arrived and they seemed to want me to leave the bike with them and come back later on. That should ring alarm bells whenever they are not happy for you to wait with the bike and watch them work. After some talking they agreed to let me wait and said that they needed to go and get the bike cleaned fitst. I thought this strange because it would be best to clean it after the dirty work had been done. 1.5 hours later and he arrived back with a shiny bike but I suspected that nothing had been done.

He told me that they had aligned the back wheel, fixed the spoke and changed the bearings and then tightened the tappet screws. I knew that the spoke had been changed but the wheel did not look like it had been removed and the head screws needed tightening, which I asked them to do, so I suspected that they had not changed anything inside of the engine either.

I think he realised that I was not happy and asked me if I was…I told him that I was not and why I was not. He then gave me back 250 rupees out of the 1,000 advance I had given him because he realised he was in the wrong and it was daylight robbery. He also said that the engine oil didn’t need changing, which was nonsense, and he had the guy who said he was the mechanic overfill the engine oil which was very annoying. He also overfilled the brake fluid level just to make it look like they were actually doing something.

Overall, the service was really bad and kind of what I had come to expect from Indian mechanics. So, I left Visakhapatnam still in need of a service and losing hope that I would actually find one that could do a good job.