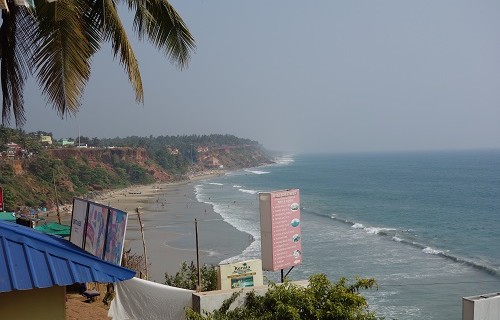 I had heard mix reviews of Varkala, from it being a beach paradise to the place which has been overrun with tourists and gift shops. It turned out to be the latter, and quite a boring place I found.

As with all the places where tourists flock, there are a large number of restaurants and people trying to sell you something. Varkala is no exception to this. The cliff top, which is actually amazingly beautiful, is littered with shops, restaurants and bars. It’s a cliff that is eroding quite quickly actually so maybe they won’t all be there that much longer. Maybe that’s a blessing in disguise.

I didn’t actually make it down onto the beach because I was in a not so impressed mood about being there in general and was incredibly hot. I had only a few days ago been in the mountains and then to Alleppey which was cooler due to the wind around the waterways and having stayed indoors for a fair amount of time, so I was incredibly hot when I arrived. I didn’t really want to sit out on the beach and get cooked. One day I managed to find some decent wi-fi so I did some work and caught up on some emails.

I met up again with Mark, who I had met originally in Fort Cochin and travelled with to Munnar. He had stayed in Munnar with some Israeli guys because one of them was getting their bike sorted out. I went to the place that he was staying at, I think it was called Red House, near to the cliff top. I paid 500 a night for quite a nice, freshly built cottage. It’s called a cottage but it’s just a room really. This one was a pentagon shape, which was kind of unusual.

After just 2 nights at the place I decided that it was time to move on and make my way down to Kanyakumari, so I did so alone because Mark was waiting for the two Israeli guys to turn up but they were quite a way behind at the time.