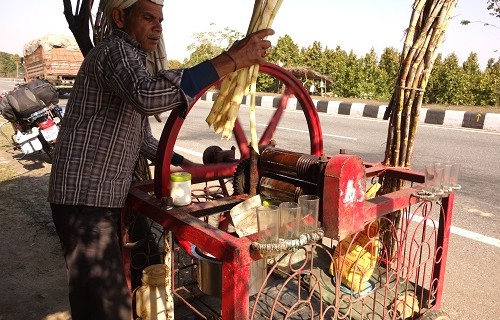 I was really looking forward to my trip to Varanasi because I had heard from many people that it was a great place to visit. Unfortunately, that was not my first impression of the city…

On arrival I attempted to head towards the areas where I knew there were going to be some good hostels that I could meet people in. I rode into town and hit the first obstacle – traffic, and lots of it. After making my way through most of it, I hit my 2nd obstacle – road closures, most of them. I couldn’t get to the hostels by bike so I had no option but to look for another place. I found one pretty quickly but it wasn’t great. It was cheap though and had parking for my bike so it was safe.

Upon unloading my bike I noticed that I had something missing, it was the 3 litres of oil that I had put into my pannier of my bike. I had not tied it down so someone must have stolen it when I was stuck in traffic. Now I think back I did feel a bump which must have been someone taking it out. Bad first impression.

Sightseeing is Not Free

I decided not to worry too much about it as it was only oil after all and I had not got anything important missing. It was about £8 but nothing major. I tool a stroll down to the Ganges, through the pedestrian streets. It was pretty chaotic, and when I got down to the water there were no end of people trying to get me to have a shave! I couldn’t tell if they were giving me their opinion or wanting to get me to let them shave me, neither of which I appreciated…

I went to look at one of the ghats where there was a burning going on. The ghats are where people burn the bodies of the dead so that their ashes can go into the Ganges. On a side note, if you are ever to get into the Ganges, do it upstream of Varanasi…Make sure you don’t swallow any because they even throw dead cows into the river because the cow is holy and so is the river.

So, I was watching the burning and a guy was trying to tell me that he worked there and wanted to show me around just for a small donation for the old people’s home which is nearby. I didn’t want to so i said no, politely. He continued to insist that I take it, I said “no”. After some time of this he told me that I should leave because I was not getting to know the culture and reasons why people do the burnings in India. I thought it was a scam.

So I moved about 10 metres away and continued to watch. He came back again and quite aggressively asked me to leave so I did.

After those two experiences and the fact that I couldn’t stay in a place that I wanted to, I decided to leave the next day and head along to Lucknow which was a stopover before I went to Agra.