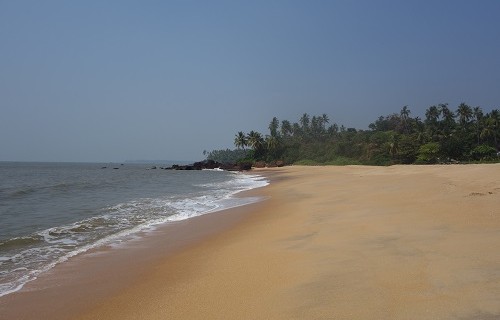 I was making my way down the West coast of India, from Goa towards the southern most tip of India called Kanyakumari. I was riding my Royal Enfield so I had to make quite a few stops along the way. Some of them I already knew, places like Kollam and Alleppey which are tourist hotspots and in all the guide books. But they are very far from where I was at the time so I had to look for a stopover on the way. Thottada was one such place, but it’s funny how the intentional stop gaps can become something a little more…

I had spent the previous night in Malpe which is a fishing port a few hundred kilometers down from Goa, in the state of Karnatka. I stayed in a place called Hotel Karthik and it was quite bad. The heat in the room was unbearable. I lay there, fully naked with the fan on full power and I was still sweating. I woke up in the morning with a severe headache from dehydration and I left…

I had picked out Thottada by chance really, just through looking at a guide book and online. I decided to make a stop there and see what was there. It was supposed to be very idyllic.

I had trouble finding the place at first. I was riding around what appeared to be a small town, down lots of back roads and parts of town where only locals lived. There didn’t appear to be any kind of tourist concentration like you see in Goa. I eventually found the beach road, which was down a very steep, dirt track leading almost to the beach. The road ran parallel to the beach, just 20 meters away.

I found a place called Shoreline, which looked more like someone’s home with a gated driveway, than it did a tourist resort. I was dirty, sweaty and tired after a long ride and a bad night’s sleep so I was very happy to find myself in one of the most tranquil settings that I have found so far in India.

It was actually a house, converted into rooms with 4 double bedrooms and a small outhouse which housed another 1 bedroom. It was exceptionally well presented and clean. The bedroom I stayed in was spacious, clean and had cable TV. In total I was paying 2,000 rupees a night, which is around £21, for the bedroom and 3 meals a day. Pretty good for a place with a sea view and not many other tourists.

Shoreline had one cook and a house manager, both of whom stayed at the place. The food was freshly prepared every morning, lunch time and evening. It was some of the tastiest, freshest and delicious food that I have ate in India, which is part of the reason that a planned 1 night turned into 3…

Around the area there are many beaches and small villages that you can walk through if you want to explore a little. The beach is so quiet that I found myself on it alone one day at around 2.30pm. Something that you do not find on many beaches in Goa in my experience, at least not on the more popular ones. There are some hidden ones away which are less busy.

There is a small town a few kilometers away which is easy to get to with a bike but a bit of a hike up some hills if you want to walk it. You can find everything you need there, from food to ATMs.

The beach itself is around 6km south of Kannur, which is a larger town. It is easy to get to from there by auto-rickshaw.

The staff at the Shoreline were amazing. They were very helpful and did everything they could to make the stay more enjoyable, from helping with local knowledge to preparing excellent food and adjusting the mealtimes when necessary.

The fact that there were 3 other couples who intended to stay there for a whole month shows just how much people liked it. 2 of the couples had not planned to stay there long at all, they had wanted to explore some other beaches and areas but they just couldn’t leave…It was too comfortable and nice to leave it.

In the afternoons there it would quite often be just myself and the staff there. I would be sitting up in the dining area, doing some work or using my laptop, listening to the sounds of the sea and the birds. That it literally all there was. No noisy horns beeping or anyone trying to sell you anything. Just the beach and the ocean. A very beautiful place and one I would recommend anyone passing through that area should stop at, but be warned that you might never leave…