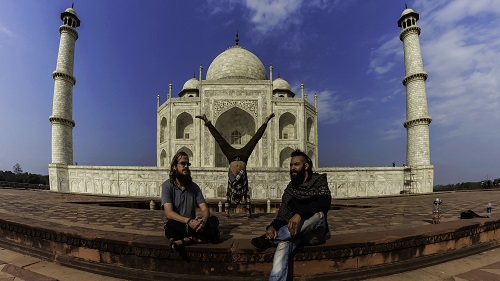 I was very happy to arrive in Agra because I was looking forward to seeing the Taj Mahal again. I saw it for the first time about 5 years ago but we only had 1 day to see it, which was a Friday, but we found out when we arrived that it was closed on a Friday! So we had just a couple of hours to see it on the Saturday morning and it was overcast and cloudy. 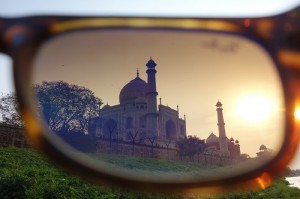 The Taj Mahal through my eyes

This time I was determined to spend some more time there and see it in a good light, both sunrise and sunset. I was not disappointed. On my first day there I went for a walk and found a friend of mine that I had first met in Goa. His name is Maxi. I’d seen him twice before, in both Hampi and Varkala so it was odd to see him walking down the street again, or maybe I shouldn’t have been surprised at all! Maxi was there with another guy I had already met called Nat and another guy I had not met before called Mikey.

Maxi and I went for a walk down to the river which runs behind the Taj Mahal. We were really close to it, took a few photos and had a look around. We then decided to walk further along the bank to some old ruins that we could see which were nearby. When we arrived we saw two kids standing around who offered to show us around…I was a little skeptical but we went along with it. I’m happy we did because they took us up on top of some ruins which had an amazing view of the Taj.

We all decided to meet up the next morning and head on over to see the Taj for sunrise. We met around 6.30am and made our way down to the entrance and joined the large crowd of people who had already started to line up in front of the gates. It’s a popular time, early in the morning.

Inside the Taj grounds it was just as I remembered it, beautiful and an amazing sight. The Taj itself is pristine white in colour which would be impressive anywhere in the world but is even more so in India because of the contrast to the pollution and dirt that is around outside of it. The grounds are incredibly well maintained.

While wandering around the Taj and taking as many photos as my camera could store and my fingers could keep up with, we started to take some pics of us doing handstands and cartwheels, me and Mikey that is. We found a great position and snapped away. In the background we saw a man with two cameras – there are two options when someone has two cameras. He’s either a pro or has more money than sense. In this case the guy, called Goutam, had a bandanner on his head so I assumed, rightly so, that he was a pro!

He came over and asked if he could take some shots of us and we agreed. We spent the next 30 minutes taking hundreds of photos each with precisely sketched out with Goutam’s artists eye having final approval before shooting could commence. His camera, one of them anyway, had a fish eye lens and was a superb piece of kit. The quality and angles of the shots were far better than anything we could have accomplished even with the same kit at our disposal.

We took many takes at getting a perfect handstand in front of the Taj with Nat and Maxi sitting in front of it and myself doing the handstand. I can do handstands but when there is added pressure it makes it more difficult. Not to mention the fact that there was a drop of a few feet right behind me and I was supposed to open my legs and look back at the camera while doing the handstand, so not much to ask for…

Goutam had a rapid fire, continuous shooting option on the camera which sounded more like a fully automatic machine gun when pressed rather than camera. The result was a flipbook style account of our actions, in a fish eye effect which captured the Taj in all its glistening white glory.

I couldn’t stay exactly where I had wanted to because I was not able to get my motorbike down the areas where I wanted to sleep. To their credit, the Indian government and police have done a good job around the Taj because they’ve made it a pedestrianized zone. The lack of car fumes and noisy horns is a blessing.

I stayed slightly further out from all the hustle and bustle near to the ticket office which is around 1km up the road from the Taj Mahal entrance in a place called Hotel Rishmi. It was a nice place and the staff were helpful and friendly. The room was pretty large and cost 700 rupees a night so I was happy with that. I’m not really into slumming it so I’m happy to pay up to 1,000 rupees (£10) a night but sometimes I have had to pay up to £25 a night in a larger city where I stayed in more business style hotels.

Great Views of the Taj Mahal

As I was saying earlier on, Maxi and I went for a walk down to the river and to some old buildings. To get to this spot you have to walk to the right hand side of the entrance to the Taj Mahal as you are looking at the gate. Continue along the path until you reach a fork in the road/path. Most people continue straight on, and that is one place to take some nice photos from, but if you stick right and walk for 5 mins or so it will take you into a small little village area. 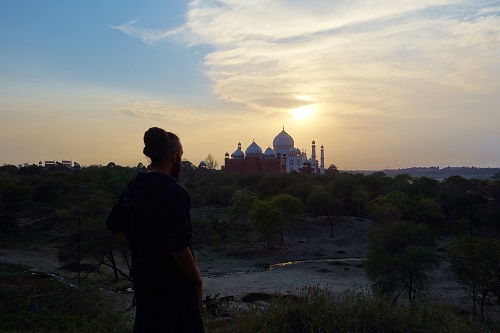 The little village is completely untouched by tourism. It seems as though it has completely avoided any interaction with it and even some of the people did not know who the name of the king was who had built the Taj Mahal. As you go through, there is a small wasteland area which you can walk across and then go towards as small ruin which is overgrown with weeds and grass. Upon closer inspection it looks as though it has some of the same designs that are on the Taj which made me wonder if it was a miniature one which they had tested out before creating the full scale one. Or maybe they had built it as the original mausoleum and then thought that it was a bit pathetic and built a proper one.

Another good place to view the Taj from at sunset is across the river where there is a park. You have to drive around in a rickshaw to get there. One piece of advice is to not pay the 200 rupee entrance fee for the garden unless you actually want to see the garden beause you can walk down the side of the garden to the river and get just as good of a view from there for free. 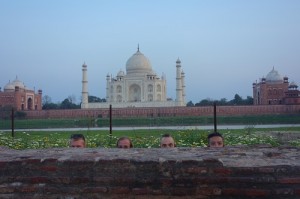