When I arrived at my hostel in India, Traveller’s Inn, the receptionist asked me if I wanted to go on a slum tour. I wasn’t sure at first as I didn’t know what to expect or even think that the people of the slum would be happy about it, but I went anyway and I’m really glad I did. 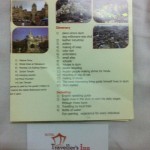 Slum to me brings up images of dirty, poor and ill people living illegally in squalor. The tour guide was quick to point out that it’s only the illegal part of that description that is actually true. A slum is an area of land where people have built homes and live there but without permission to do so. He also told us that Dharavi produces around 600 million dollars worth of exported goods every year! Apparently the area is 1.75 square kilometers and is home to 1 million people.

It was certainly cramped when we arrived but didn’t seem to different to some other areas of Mumbai that I had visited before. They had roads, taxis there and shops. But that was the outside area, and we went deeper inside. The slum id divided into two main areas which are separated by a main road. On one side is the more reidential part and the other is the more industrial area. They have tried to keep them separate because the fumes from a lot of the working areas are toxic, like melting tin foil and aluminium, but that doesn’t seem to stop the workers from doing it for 18 hours a day without any kind of protection.

There are areas within the slum which are for a certain type of skill. For example, the pot making areas are all grouped together in one part and the recycling workers in another.

The religious belief of the people also determines where they live. There were riots in 1992 in which the hindu and muslim people fought one another so they all moved to their own areas to separate themselves. They live peacefully today, especially because the younger generation who have forgotten about the riots want to live together in peace, just as they socialise, go to school and live together.

Because it is mainly the men who go out to work while the women stay at home and look after the children, they have come up with jobs for them to do. They get delivered the materials to make poppadoms and then they roll them out and put them out to dry, then the trucks come to collect them again. I’m told that each woman can make around 6-7kg a day and they get paid around 20 rupees per kg.

Apparently a law was passed in 1995 which said that all children have to go to school between the ages of 6 and 14 and that it is compulsory. Also, the people realise the value of education and being able to speak English so all of the classes apart from two are in English to help them learn.

The tour guides that I went with, called Magical Mumbai, were really good and the guide was really friendly and told us a lot about the area of the slum.

It’s amazing to see how creative the people have been with the space they have and how to maximise the use of that space. This is not only present in the work areas but also in the houses. They usually just have one floor space which is used for everything; sleeping at night, working in the day and cooking for mealtimes.

I believe that the Dharavi slum is actually a sign that they can work, be productive and help people who are in a difficult position. Whether this is representative of every slum I’m not so sure. You do hear of young children working in horrible conditions, drugs and criminal activities going on inside of the slums but this didn’t appear to be the case in this one.