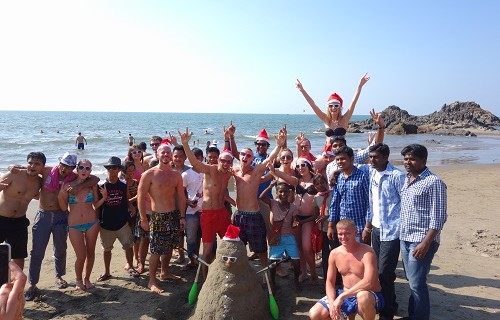 I was in Mumbai and I had not met many people because I was staying in a guest house in a private room and there was no communal area inside, but on one of my last days there I met a guy who had just come up from where I was headed, Goa. He told me about a place called Prison Hostel which was a really cool party place to stay at. Having stayed on my own for a few days I felt it was time to have a party, and that’s where it started…

As I am writing this I am still in prison…I have been here for a total of 20 nights, with two short breaks; one away in the Jungle and the other to Mario’s guest house to save on costs. The prices have been hiked up over Xmas for everything, from scooter hire to accommodation. The scooter was originally only 200 rupees a day when I arrived and now some people are charging up to 1,000 a day! A room in Prison hostel was 400 rupees a night when I arrived and has steadily increased up to a peak of 2,500 for a night…

As a result of all the increased prices it seems to have scared away all of the travellers and they have been replaced by more tourist types, such as Russian and Indian holiday makers who are away for a week break over the Xmas and New Year period.

I didn’t know about them before but I found out that there were to be two large music festivals on while I was here. One called Sunburn and the other called Supersonic. Sunburn was in Vagator next to a club called Hill Top. Tickets were pricey, at 4,800 for a day and 6,500 on the last day. It was a little too expensive for me so we looked at supersonic and it was much cheaper but further away, down in a place called Candolim.

One of the workers at the hostel, Mandy he was known by, had two VIP tickets for it so me and my friend Tim bought them for 3,000 each and they lasted for 3 days. Full power, 24 hour! I decided not to go on the last day so I sold my wristband to an American guy for 500 rupees and he went down with Tim.

There were DJs like Booka Shade, Ferry Corsten and Above and Beyond playing there so it was predominantly a trance music festival. I liked the music in the end as at first I wasn’t sure if I was going to like it.