I first knew of the place Pondicherry when I saw Michael Palin travel to it on one of his BBC documentaries. It looked like a strange place because there was a large French influence still there. The traffic police were dressed in very French looking uniforms and the buildings were also very French looking. I knew that I would visit there for that alone, and there was another one more reason.

A friend of mine called Nitzan who I met in London through Couch Surfing lived in Auroville. That was the first time that I heard of it. In essence it is an attempt to bring many people together, regardless of faith, to work as one towards a common goal. 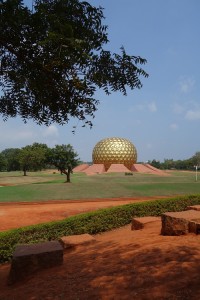 The Matrimandir in Auroville

The Auroville site was first established in 1968 and has been growing ever since. The idea is that you live and work there, perhaps teaching children or working on one of the many projects that they have. The projects range from generating solar energy to finding cost effective and eco-friendly ways to build housing. The ideas get funding from outside sources.

It is said that Auroville belongs to no one and that the land is there for the community to grow and develop together in harmony. I love the idea of it, but I can’t help thinking it’s a little too idealistic. When the whole World around you is using money to exchange goods and services, moving to a system where money is no longer in use kind of isolates you. For example, if you live and work in Auroville you get paid a “maintenance” each month. This should be enough for you to live day-to-day but doesn’t give you any real way to save money, so you are unable to travel or go on holiday or even buy a home of your own without extra funding from some other place.

At the heart of Auroville is the Matrimandir. It is a large, round shaped building which looks like a gold golf ball. Inside is a space which is to be used for concentration. It is not called meditating because Auroville is separated from any kind of belief system or religion. The idea is to be fully conscious and aware of oneself, so the thinking is that you go to the Matrimandir to concentrate.

I would love to have been inside of it but unfortunately the timing was bad. A friend of a friend, Kavitha, had met me the day before. Kavitha lives in Auroville and agreed to meet up and show me around. There was a chance that I could go to the Matrimandir with her and her Dad the next day but it was too late to add my name to the list of allowed guests. I’ll have to visit it next time I am in India.

I stayed in a place called Pleasant Inn which was in the centre of Pondicherry, on a busy street. It was a new place, around 6 months old, so everything was incredibly clean, fresh and new. I liked it from the moment I entered. The staff were really friendly and helpful and the rooms were only 600 a night for a double bed with en-suite bathroom and cable TV.

I met a guy there called Ryan who was Vietnamese but had been living in Singapore for the past 12 years. He was a cool guy and we 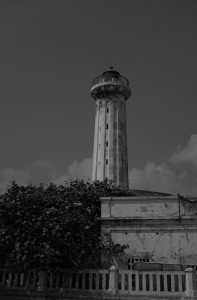 The Lighhouse on Pondicherry Beach

hung out together for a day until he had to leave to fly back to Singapore from Chennai. He told me about something called Vipassana which is like a meditation retreat in Malaysia. I have heard about it before from a few other people. It’s a 10 day silence, where no contact is allowed, both between the outside world and those in the retreat. There is to be no eye contact, and you meditate for 10 hours per day. Many people have described it as life changing. It was interesting to hear his account of what it was like and I think I am going to try it when I fly down to Malaysia.

There are two parts to Pondicherry. The French area which is closest to the sea and then the normal area which starts after roughly 4-5 blocks inland. Walking around the French part is very nice and gives you a sense that you are not in India. There is a large park, small cafe shops which have a very European flavour to them and pastel coloured building down most streets.

If you are looking to buy something, anything, then this is the place to do it. There are so many shops here that you can get whatever you need. From clothes to jewelry. I’ve never seen so many jewelry stores in one place.