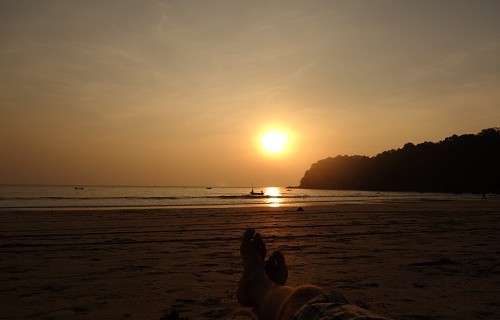 After some time in Hampi, and having liked some rest time from too many parties in Palolem, Goa, I decided that I would visit one of my friends who was staying in Patnem. Nathan was also there for the same reason; to get away from all of the parties.

Patnem is a very quiet beach compared to Palolem. There are a lot of couples and groups of people who want to get away from the often very crowded beach next door. It was a nice relaxing place. We stayed on the beach, in a hut just a little way back from the actual beach for 300 rupees each per night. We were sharing a room and Nathan was snoring so loudly that I didn’t think I would be able to stay there another night…So I got some ear plugs and all was OK.

I met a guy who worked there in the restaurant who was from the north of India. He was a really good guy and was a personal trainer and dance enthusiast. Break dancing he liked so he had good gymnastic skills and could also use nun-chucks!

It was here that I got introduced to Old Sailor which was the cheapest rum I have ever had….85 rupees, so the equivalent of 85 pence, for a 750ml bottle! Unbelievably cheap, but who knows about the quality of the product so we only had the one bottle…