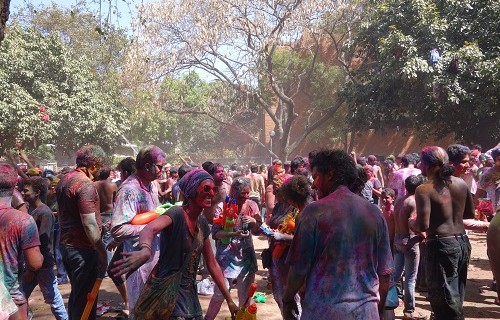 I had intended to miss Delhi, or just use it as a stopover point, because I did not want to visit another city. I’d seen enough of those over the past few months so I wanted to have more time in the mountains where the air is clean. The original plan had been to stay in Delhi for Holi festival because I had two friends living there. Unfortunately both of them were going to be away when I had planned to visit but then at the last minute Patrick said that he was still going to be there so I could come and stop with him.

I knew Patrick from Prison. That’s Prison Hostel in Goa and not real Prison, as I haven’t been there yet. He was living there for a couple of months because he was looking to get a job there but it hadn’t worked out so he was heading to China in a week or so. I made the decision to go and stop with him and celebrate Holi festival while I was there.

It was nice to be staying with someone who I knew and who knew the place better than I did. We went out quite a few nights to a place called Hauz Cauz which was about 100 rupees in a rickshaw away. I love that in India you can get anywhere in a rickshaw, meant both in terms of distance and through any kind of traffic, for very cheap. It’s effectively a motorbike with a wooden bench attached to the back. Cheap to run and maintain and small to fit through lots of gaps in the traffic.

While there we ordered food from the same place at least once a day! It was called Delhi Kitchen and they did great chicken rolls for 100 rupees. They delivered too, and were just around the corner so very convenient for speedy delivery. We ordered so often that in the 5 nights that I was there they got to know me and my usual order of butter keema parantha and chicken roll…If nothing else I am predictable.

One of Patrick’s flat mates previously went to a university nearby and she knew that they would be celebrating Holi on the campus and it would be good fun so we decided to head down there for the event. We went down around 11am to find things in full flow already. There were people throwing paint at each other, rubbing it in their hair, on their faces and clothes. There were guys ripping each others shirts off and throwing people into the mud on the floor which had developed as a result of numerous Holi-ites (what I call people at the festival) throwing buckets of water over each other.

It was like nothing else I have ever seen before. I don’t think it would work in many countries because the rubbing of paint on each other would turn aggressive but not in India, everyone was going about it nicely and with no problems, even with people that they did not know. Another tradition of Holi is to drink a concoction called “Bhang”, at least that’s how I think you spell it. Essentially it’s marijuana mixed into a drink with some alcohol thrown in for fun. I didn’t particularly want to have much so I just had a couple of mouthfuls of someone else’s drink that was offered to me. I didn’t actually feel any effects to be honest which was probably a good thing. Patrick did feel something, but not for 2 hours by the time we were on our way home.

I had left my bike in the garage area at the bottom of the flats where Patrick was living and hadn’t looked at it for 5 days apart from to check it was still there. I packed my luggage ready to go and noticed that the indicator had been broken off. I assumed it was because cars had been driving in and out of the garage so hit it. However, after loading up and starting the bike, I noticed that the front tyre was flat! It wasn’t a slow puncture because I found a twig in the valve which means that someone intentionally let it down. Not particularly nice…Luckily Patrick knew a guy who was standing outside and he had a decent large, manual pump so I used that to pump the tyre up and it was fine for me until I got to another place to do it properly which I didn’t actually need to do.

I wanted to buy a leather jacket and some warmer base layer style clothes before my journey up to higher altitudes because I knew it was going to be cold and I was already starting to feel it on the legs. We went to a place called Yashwant shopping centre because it was a leather market, among other materials. The competition was high among traders which was good for me because it meant that they went much lower on the prices that they were offering. I found one that I liked. It had harder leather than most of the others which was good for riding in and a warm lining. It was a green, grey colour which would hopefully not show the dirt as much as a black one would. Originally he was asking 7,000 for it but I managed to get it for 4,500. I think that was a pretty good deal as they seemed to go for around $150 when I looked online.