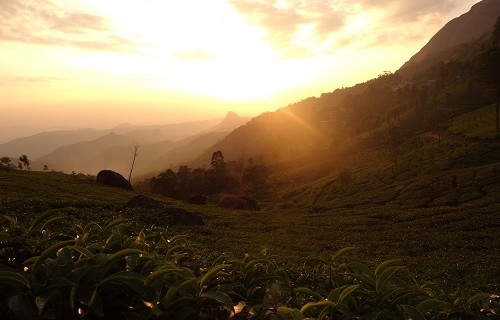 Munnar was not on my list of places to visit when I first arrived in India, but I am really glad that I added it. I heard several people speak about it along the way and after getting the bike it was a definite place that I wanted to see. The reason was simple. There were lots of winding roads, weaving their way through the beautiful tea plantations and up to a high, hill station at around 2,500m.

Munnar is around 130km inland from the West coast of India. I rode there from a place called Kochi, Fort Cochin to be precise. I rode out there with a guy I met called Mark who, I soon realised, I had already met when I was in Anjuna but just very briefly. 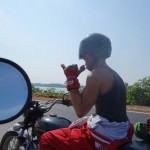 Cruising with Mark to Munnar

We rode out along normal roads to start with and then stopped for lunch along the way. After filling our stomachs we headed on out along some very nice, winding country roads which steadily started to climb up more steeply as we road further along the roads. The area was quite heavily forested with large, well established trees.

The roads were brilliant for riding along because they turned often and smoothly and the road surface was very smooth. We found ourselves high up in the tea plantations very quickly and we had arrived in Munnar.

After settling in at our place in a small hotel in the old area of Munnar, we headed up to the new part of Munnar. The area outside of the main town is called Old Munnar and the main area in town is new Munnar. There is not much to see there really, just a few shops, restaurants, travel agents and a petrol station. It also had the only bar in town. 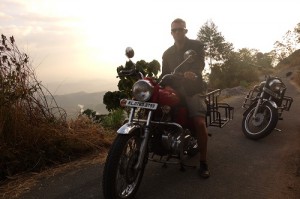 Finding the perfect sunset in Munnar

We decided to try and watch sunset from a good vantage point so asked around for the best place to view it from.

Probably the best riding I have done was up to Top Station in the Munnar Hills. It was 36km each way, through tea plantations, winding roads and beautiful scenery. I loved it so much that I did it two days in a row. The first day was with Mark, two Israeli guys we met (David and Yonni), an Australian guy called Ben and a Spanish girl called Rach.

Mark and I rode on our own bikes and the other 4 went on two other Enfields, so there were 4 Enfields in total. It was great to ride around in a group, cruising around Munnar through the beautiful scenery. 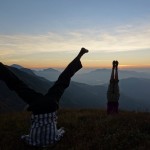 Yoga Headstands for sunrise in Munnar

that there was a guy who went by the name of R Mani who was willing to take us for a small fee…700 rupees per person, with breakfast included, but that didn’t work out in the end so he did con us a little bit!

We had to get up early, around 5am, and take a 12km auto rickshaw ride to the base of the mountain where we parked up and started our ascent. We made it up quite a way before the sun rose and we had an amazing 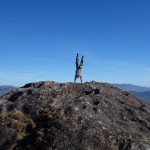 Jumping from the top of a Munnar Mountain

view across the other mountains while the sun was shining through the morning haze. We stopped and watched it rise while our guide and Leah, who was on the trek with me, did some morning yoga headstands.

We continued up the mountain and made it to the top an hour or so later. The views were great and it felt nice to be up high in the fresh air. We stopped for half and hour and then headed back down, after we had taken some photos, of course.