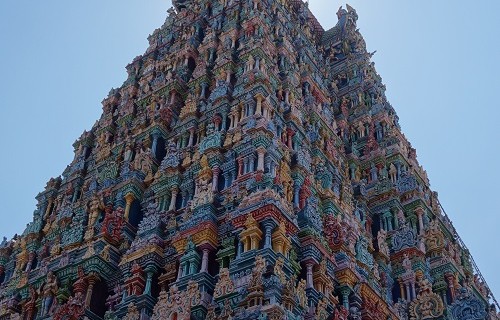 Madurai was a place that I hadn’t read anything about, hadn’t planned to go to and wasn’t expecting much from. Fortunately I went there because it turned out to be a very cool place indeed and a place where I met some cool people.

I had a vague recollection of someone telling me that Madurai was a place where there was a great temple to see. If I’m honest, I’ve seen quite a lot of temples and I was a little templed out so that was not a great selling point for me. If that sounds familiar and you are not sure whether to visit Madurai, please do visit. Even if you don’t like temples, you should visit.

The temple complex is comprised of a large square. The north, south, east and west walls of this complex incorporate four large towers, around 20 stories high, with up to 2,000 individually carved sculptures of many Indian gods painted in many different colours. The result is incredible. It’s a sight the likes of which I have not seen before. They are well maintained, too, which is unlike most of the sacred places in India.

THe 4 walls and towers house a grounds which have a walkway around the perimeter of the walls. There is then a roofed complex which has active temples, what I can only describe as a swimming pool like structure, a museum and a place where people sell goods, of course…Inside one of the areas there is an elephant dressed in bells, but no whistle. The elephant keeper sites beside its leg counting the money, while the elephant rocks from side to side and accepts money from any visitor wanting a blessing. To get a blessing, you walk in front of the elephant and give it some change or a 10 rupee note. It takes the note in its trunk and passes it to the keeper, but before that it hits you over the head with its trunk. I say hit, but it’s more of a light brush really. I’m not sure how effective the blessing is but it’s definitely fun to do.

As the elephant lifts its trunk up to accept the money it opens the end of the trunk up to reveal what look like two nostrils. I guess it is the nose after all, so it makes sense, and it makes a kind of sucking sound…I was a little hesitant to put my hand too near it at first but went for it and the elephant took my money without any problems and dropped it straight off to the keeper.

On my first day in town I was sitting outside of the temples and I met three people. An English guy called Ryan, an English girl called Giullia and an Australian girl but I don’t remember her name because she went home very soon after we met as she was feeling ill and had a flight to Delhi to catch the next day. I went along with Ryan and Giulia for the rest of the day and Ryan invited me to an event at the school he was volunteering at that evening. It was their 21st annual awards ceremony. He was due to make a speech and present an award. We went that evening, the three of us, and it was entertaining. We even got a free meal out of it so that was a bonus.

It was the following day that we met up again to go to the temple and see the elephant. That day I met a Japanese guy called Naoki at my hotel. He was staying there, too. I invited him along to the temple with us and he came along. After that temple Naoki wanted to head back to the hotel but myself and Ryan decided that we would go bowling, for a bit of a home comfort treat. We went to a local shopping centre where they had bowling, fast food, shops and arcades. We played a game of bowling and then used the arcades for an hour. It was good fun.

Ryan and Giulia were both volunteers in Madurai. They were doing it with a company called projects abroad. Ryan worked at the school for free and in return he got accommodation and food from a local family. It wasn’t free though, as he had to pay to do it. It was a 5 week program in total. Giulia was working for a local magazine because she was interested in journalism and also stayed with a local family. It sounded like they were having a great time, working in the week and then going away on weekend trips with people that they met who were also volunteering abroad.