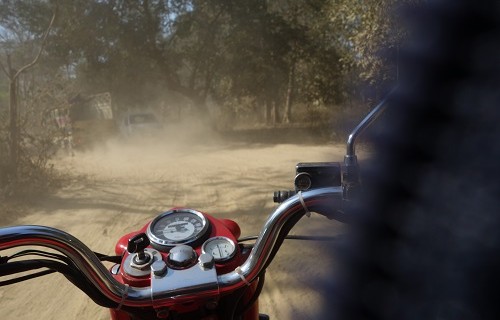 India – Lucknow, not So Lucky Now!

I left quite early to head on up to Lucknow. I had already found that there was a Royal Enfield dealership there so I wanted to get a few bits checked on the bike, little did I know that I would have to get some repair work done, too….

On my way out of the hotel in Varanasi I mentioned to the manager that I was heading to Lucknow and he commented that it was a hard ride because the road surfaces were not great so it would take quite a long time. With that in the back of my mind, I set off looking to make some good speed while the roads were clear early in the morning.

After a few hours on the road I was making good progress, then I was halted in my ride with a bump straight into the back of a 4×4 jeep. He was braking and had not brake lights. I broke hard, but because the bike is heavy, the brakes are not good and I noticed him late I did not have enough time to stop. I narrowly avoided my front wheel hitting his jeep but hit the headlamp against the rear lights, skidded a bit and then fell off.

A few people on bikes stopped and helped me up while the driver inspected any damage to his vehicle. There was none so he was not too bothered and drove off. I took stock of what had happened and checked myself and the bike over for damage. I was fine, just a bumped knee, small scrape on my knuckle (no gloves) and a bruised ego!

The bike was also pretty good apart from the broken headlamp. The brunt of the fall had been taken by the bars on the front of the bike, which acted like a roll bar protecting my leg from getting trapped and smashing any of the fragile parts on the bike. Result! Now it was time to visit for Enfield service centre in Lucknow that’s for sure.

The cost of the headlamp was only 650 rupees (£6.50) and I got an upgrade; I added a small headlamp visor which you usually only get on the newer classic model of Royal Enfield. Every cloud and all that.