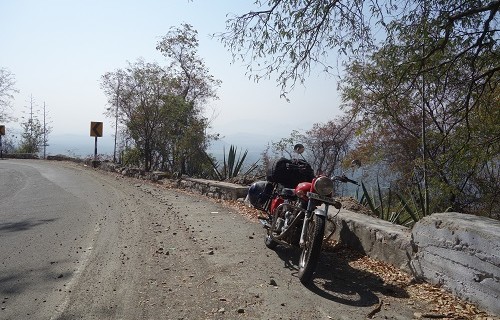 I decided at the last minute to head up to Kodaikanal because I had heard about it from some people a while before but hadn’t added it to the list of visiting places. I had really enjoyed visiting Munnar and Kodaikanal was supposed to be very similar but a little more less touristy.

The drive up to Kodaikanal was similar to the one up to Munnar, but the roads were a little worse towards the top compared to Munnar. They were still a lot of fun though and I loved riding on them, weaving around the bends, switching from a sharp left to a sharp right turn very quickly. I noticed a large number of monkeys hanging out by the roadside, some of which had cans of Fanta in their hands! Another reason why people shouldn’t throw their rubbish on the floor without thinking about it; this is India.

I stayed in a place called Kings Park. It seemed to be a nice place, pleasant enough and a decent sized room for 800 a night. I was glad that it had internet, too. I was only staying there because it had internet. The guy who worked there, and I think managed it, turned it off at 10.30pm while I was on a Skype call. I wasn’t particularly happy so I asked if he could switch it back on. As it turned out, he couldn’t/didn’t want to. After telling him that I needed to use the internet later on the next evening because I needed to work he said that “The wi-fi is not for customer use, only office use”. But he had told me the day before that it was for me to use and I would be charged 50 rupees a day for it. I agreed but if you are paying for a service you expect it to be working.

The conversation did not go well and it ended up with him kind of asking me to leave the next morning. The next day the tension between the two of us was palpable. I wasn’t going to say a word to him because I didn’t have anything good to say. I think he felt the same. I left and then wrote a review on Trip Advisor…

That’s one of the annoyances with the Indian culture in my experience. They will say anything to get you to do something even when it’s not true, such as that the place has wi-fi, there is such and such a service, etc. Then, when you want to use it, there is another reason why it’s not working. He also charged me 250 rupees for a late cancellation for the following day. I couldn’t be bothered to argue as it would have just got me even more annoyed and it’s only £2.50. This is India.