I made my way up from a stopover in Tirupati, which turned into 2 nights because it was a really nice hotel with good wi-fi and I knew I had a long ride ahead to Hyderabad. I decided to try and make the 550km ride in one day. Well, I actually thought that I would not make it and started out a little later on in the morning because I was tired and got up late, but half way through the ride I decided that I would make a run for it.

The ride started out like any other normal day. It started to get interesting when I was about 9 hours in because I had not ridden for that length of time before. I was starting to get tired, my arse was sore, my back ached and I was mentally drained. For the whole ride I only had 2 coconuts and some cashews for breakfast, so that probably didn’t help.

I was approaching Hyderabad as the sun set and got to experience what driving tired on the highway is like at night. It’s not a pleasant experience that’s for sure. There are just as many obstacles but this time it’s dark and a lot of the highways do not have lighting on them so it’s impossible to see what’s happening. I had to concentrate incredibly hard in order to avoid cars without lights and see vehicles in front of me while the car headlights coming the other way were on full beam. Not something that I will repeat again.

I arrived at a hotel that I thought was going to be reasonably priced but I couldn’t find it so I looked out for the nearest one I could find. I found one, but it was the most expensive one I have stayed at. 3,600 rupees a night. The room was nice and the hotel was very luxurious. I ate at the restaurant and the food was very good. Because I checked in at 8pm I had 24 hours for the room so I didn’t have to check out early the next day, which gave me time to find another cheaper place.

What you have to remember is that the cost of rooms in India is way cheaper than in England. So £30 a night, 3,000 rupees, is going to get you a very luxury room probably equivalent to a £150 a night room in England. If you stay in £10 a night rooms then you will get something decent still. This does vary from place to place and in the cities it is often more expensive but you can get a decent place for £6 when not in the major cities.

I had been looking for a place to service my bike because it was in desperate need of a good service. I read up on the internet about a 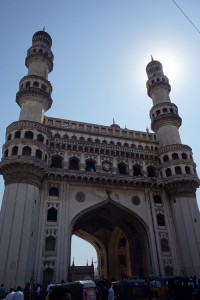 place that was in Hyderabad and decided to try to find it. I thought I had found it so asked the guy to do a service. I definitely wish that I hadn’t bothered. The garage was run by two old guys, probably 65 years old or more, and they were really struggling to hold bolts still when trying to screw them back in, were very clumbsy and could not move down around the bike like they needed to.

After watching him try to do various jobs on the bike I wanted to ask him to stop! He cross threaded the bolt which covers the gearbox next to the kick start so that was a problem which they then bodged up with some kind of sealant to hold the bolt cover on with.

He didn’t change the oil or air filter so I left it as it was because I didn’t want him to do anymore work on it. I walked away knowing that I still needed a service but thought that it could wait until I found another place, a better place, to get it done.

I visited the Charminar when I was there because it was one of the main attractions. It was a nice monument but completely surrounded by cars, buses, loads of vehicles and hundreds of people. The people were fine but the vehicles caused the worst pollution I have seen. You could see the fumes rising up from around the cars and people were walking through it all. It was horrible. I didn’t stay there long because it was so overcrowded and there was too much pollution so I made my way to Golkonda Fort.

This was such an unexpected gem of a site. I had no idea what to expect when I arrived, but the drive in through the small streets and what still remained of the old outer fort wall, some 0.5km away from the main fort, should have given me some idea. The fort was huge, sitting high up on the hillside with 360 degree views of the surrounding city. In the near distance, you could still see the remains of the old fort walls which would have protected all of the people living inside of the walls. It was really impressive how large the area was.

View from top of the Fort

Like a lot of sights in India, they are not too protective over what you do there and where you walk. In Europe, there would be lots of roped off areas and no touching of anything. Not in India. You can pretty much go wherever you like, climb over walls and touch whatever you want to. It’s great. It really allows you to experience the place as though you were really there without the reminder that you are not there with lots of notices, signs and ropes that prevent you from going where you want to go. The only downside is that the place is not as well kept as it could be, so there is a large amount of rubbish scattered around the place as well.