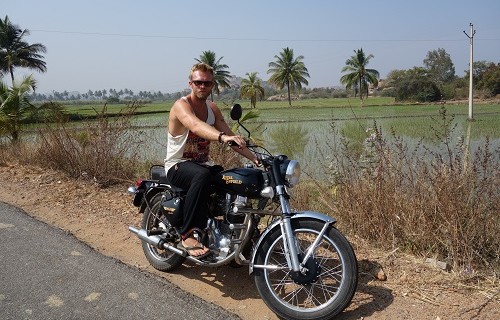 After 2 months worth of partying, drinking and abusing the body it was time to start a new year and a new destination…That destination was Hampi and we left the confines of the Prison hostel in Anjuna, where we had been imprisoned for over 1 month. Well, I had but my friend Tim had been there for nearly 2 months. It was time to escape!

We left Prison hostel on the 3rd January on a sleeper bus, Hampi bound. A very rough and bumpy ride awaited us and fortunately we were sharing a double bed area between ourselves so we weren’t too cosy with complete strangers.

There are two sides to Hampi. The dry side without any alcohol and the other side with alcohol. The dry side is home to many temples and sites, whereas the other side is home to a lot of travellers who do not want to go dry! Amongst the boulders you will find many people bouldering at sunrise when it is not too hot and again in the late afternoon just before sunset. There is a big community of people bouldering and you can hire shoes if you want to try it out.

It seems as though everyone who visits Hampi and stays for a longer period of time has dreadlocks…They are usually music playing, weed smoking types so every sunset is usually accompanied by some home-made music which is really quite nice. The jam sessions spill over into the bars and restaurants so you can easily find some live music every night of the week if you so wish.

Movie nights are another favourite past-time and the bars take it in turns to play movies each night of the week. There is only one place at that we found to have a good screen, albeit with not so great sound. The other places all have very small screens, like 15″ old style monitors which are not exactly good for watching anything on.

I did a bike tour from early in the morning, around 9.30am, from one of the main temples with a guy called Hanuman who was the guide. It was 350 rupees for a 4 hour tour. It was really good and the guide had loads of stories to tell about how all the gods came to be and some very interesting ideas about what people believe happened.

I would highly recommend getting a guide because they know so much and make it a lot more interesting. I saw so many people just looking around on their own with a rickshaw and they would come, look around and then leave almost straightaway because they did not know what they were looking at.

I stayed in a place called Gopi on the other side of the river, after having stayed for 2 nights on the dry side. The accommodation at Gopi was not great because the room we had stank due to a not so high wall surrounding the bathroom with an Indian style toilet which did not flush properly.

Tim and I hired out two Royal Enfields. A red one from 1975 and a black one from 1987. They were very difficult to ride because the gears did not work perfectly and they did not idle all the time without stopping. Starting them in the middle of the day when it was very hot meant that it was a hard workout! But the noise they made was amazing…Riding through the small town with the sound vibrating the walls and echoing throughout the area was great.

The guy was trying to sell both of them. The 1975, red one for 90,000 rupees and the 1987 black one for 70,000 rupees. The black one was quite nice but unfortunately it was bent. The front wheel was completely out of alignment with the back wheel so that was a no-go as it looked like it had been in an accident.