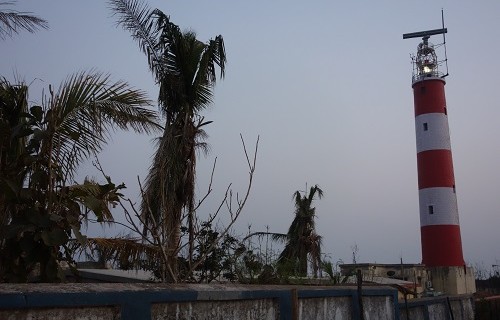 This was my second stop on my way up the coast to Kolkata. Previously I had been in Visakhapatnam and now I was arriving in Golapur-on-sea. The first thing that I noticed was how small it was. There was a road running parallel to the beach with a few guest houses dotted along it and a small town surrounding it. I asked around at a few places for somewhere to stay and the rates were very reasonable. About 400-1000 (£4-£10) rupees a night.

I was looking for somewhere with wi-fi but I could not find anywhere. Two of the hotels told me that the only place with it was the “Mayfair” hotel up the road so I decided to take a look. I was met by some large gates which had large lion sculptures outside, which should have been the first sign that it was out of my price range.

I had to leave my motorbike outside of the gates and walk up to the reception area. I was amazed at how luxurious the place was, like some exotic mansion that was for the super rich to stay at. Inside at the reception area I was given a hot, wet towel to wipe my face and hands with while I waited to be seen by the hotel staff. After a few minutes, they passed me the room rate sheet and soon thereafter I handed back the sheet, the used towel and left…The minimum rate was 10,000 rupees a night. That’s around £100. In India, that gets you so much. It’s incredibly expensive.

I decided that I would have to go without internet and stayed at a place for 500 rupees. It had a pigeon living in the first bathroom so I moved to another room. That had a pigeon living next to the air vent but it wasn’t much of a problem. I had a terrible night’s sleep because a had some kind of allergy to the dust in the room I think. Or something on the bed-sheets.

The lodge itself was actually quite quaint and the hotel manager was really nice, which is why I stayed there actually. I had been looking around for somewhere with wi-fi and asked him about his place. He was very helpful and friendly so when the Mayfair place didn’t work out I went back there. Good karma.

I decided to take a look at the beach and sit around for a while in the sun so I parked my bike up and sat on the steps that lead down onto the beach. Within 5 minutes a guy came up to me and asked the usual “where are you from?” question. I answered him but didn’t engage in anymore talk because I didn’t feel like it and he turned away and told two other guys that I was from England. He then sat about 3 metres away from me to my right hand side.

His two friends came and sat right next to me on the left hand side. After a few minutes of not speaking, the guys on the left asked me where I was from and as I turned to talk to them the guy on my right, stealthily moved in closer to me. Unfortunately for him, and fortunately for me, it was not stealth enough and I noticed. I looked at him and laughed, while immediately getting up and jumping down off the steps. It was obvious that they were trying to pick pocket from my open topped bag, because the zip had broken, that I was wearing around the right hand side of my body.

That was not a particularly nice opening to the place so I went back and got an ice-cream and some food from a nearby restaurant.