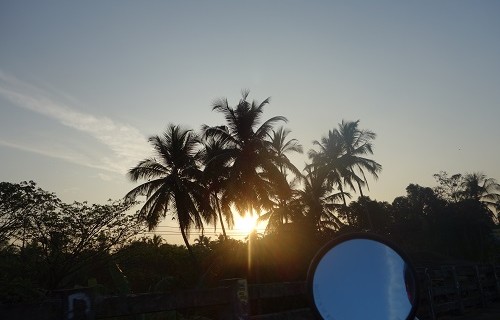 Having set off from Thottada beach very early in the morning, around 6.30am, I was hopeful that I would reach my next destination of Fort Cochin in good time. It was a 270km ride, which appeared on the map to be quite straight forward…How wrong I was. 9 hours later and I finally arrived in Fort Cochin to a hostel called Vedanta Wake Up and to a very icy reception.

I had got lost a few times on the route, mainly because I’m not amazing at following routes and knowing what direction I should be traveling in, and partly because the road signs in India are almost non-existent at times. Or very misleading when they are present, usually obscured from view or so dirty with road dust and exhaust fumes that you can no longer see them. Still, even with my getting lost it was still a slow journey. 9 hours to cover 270km is 30kph average speed. I can do that on my road bike and I had bought a bullet so I was a little disappointed.

Now back to that icy reception. It wasn’t from the reception itself, but from a couple of guests who were staying there. I was on my way out to find some food and two guys were sitting outside talking and using the wi-fi. I said hello and didn’t get much recognition in return, so a few minutes later I started talking to one of the guys. His answers were usually of the “Yes” or “No” kind…Then he left!

Near to where I was staying were some old fishing nets which dated back to a long time ago (I’d love to say that I knew the date but I don’t without looking at Wikipedia, so you should do that if you are interested…). They were basically just a large net which gets dropped into the water and then hoisted back out again. The idea being that there would be a catch of fish in there. I didn’t see one working close up so can’t comment on how effective they are, but they look impressive, if a little medieval in construction.

Fortunately I did make some other friends who were staying at the hostel. One guy called Craig was a from the States and another guy called Vincent was from France. They were both very interesting guys who had done a lot of things in their lives and travelled a lot, so it was cool to hang out with them for a while.

Fort Cochin is a strange place. When I say strange I mean it in a good kind of strange way…It felt very unlike the other parts of India that I had visited before, a little like the Goa bubble. Fort Cochin is an island on its own and can be reached only via bridge and ferry crossings. The streets were well kept and had a very English feel to them, being tree lined in places and having old buildings with a lot of character.

Just riding around the place it felt very homely, with school children wearing smart uniforms with pigtails in the girls hair. It seemed like a very affluent area of India, and that was represented by the way that the people dressed and the kinds of shops and cleanliness of the area.

I spoke with an Indian man who was having breakfast at one of the street stalls. He was about 45, well dressed in a shirt and trousers and quite a serious looking man. Well built and definitely liked to eat a little…He was a self employed trader working in Fort Cochin. It was interesting to hear his account of what it is like to work in India. He was happy to make between 1,000 and 2,000 rupees a day, so something like £10 to £20. He said that he used to gamble a lot more on the markets but then got stung for a big loss. He also mentioned how the public sector workers worked less, from around 10am to 4.30pm, but I think this was exaggerated a little like most people who want to make a point do, but there still must be some truth in it.

I was driving down one of the side streets when another Bullet approached from the opposite direction. It was a white guy, of a similar age, who also had panniers on his bike so he was travelling. We both stopped and he said hello. We got chatting and small things and I realised that I recognised him…I remembered that I had actually met him about 1 month before in Anjuna, Goa!

We went to get a beer and met an older couple who were from England. They were travelling across India by bike! Now that takes some doing. They were around 60 years old and obviously very adventurous to be taking on a challenge like that. We sat with them for an hour or so until we had to go and meet up with some other people that Mark had spoken to early on in the same bar.