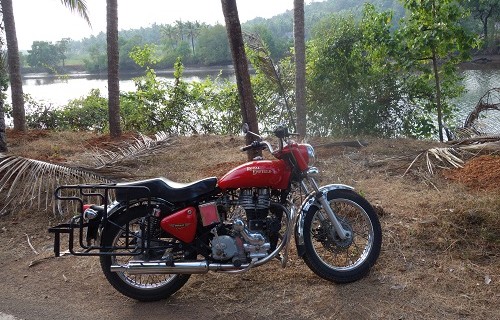 How to Buy A Royal Enfield Motorbike in India

When I originally thought about my trip to India one of the ideas I had was to buy a Royal Enfield Bullet and ride it across the country. I loved the idea because I love motor racing, motorbikes and cars. It was definitely what I would love doing. The freedom to go wherever you wanted to go and whenever you wanted to go there really appealed to me, so I did some research…

What I found changed my mind. I read on many forums that you need to be a motorbike mechanic, have very good knowledge about engines and take spare parts with you wherever you go. I read many posts about issues people had with their bikes and how expensive it was to fix. In short, everything I found out put me off the idea so I didn’t think about it anymore. Until I got to India, that was.

Why Buy an Enfield Bullet

I was resigned to the fact that I would be travelling around India by bus and train which, by the way, are excellent forms of travel in India. Particularly the train which is a very efficient way to get around when you take overnight sleepers, but that’s for another post. I met a guy in Anjuna who had a Royal Enfield 350. He had bought it in Chennai and ridden it 2,000km already. His version of events was way different to what I had read and heard about before.

He had only positive things to say about the experience and loved it. Any problems that he had were easily fixed by a mechanic in the nearest town and people were only too willing to help him when he needed it.

For those who have been to India they will know what the culture is like. It’s very much more community based so people are prepared to help one another, not like many places in Europe where people wouldn’t spit on you if you were on fire!

Searching for an Enfield

After being very inspired by this guy’s stories and experiences I decided to get a bike so I started my search. I looked at 5 or 6 bikes and each one of them was no good for one reason or another. Some were too old and seemed very likely to breakdown. They were hard to start, didn’t idle even when warmed up and seemed very temperamental which is not good when you are covering long distances. Others were new but the owners had their name on the paperwork so were not prepared to sell it to a foreign tourist, which brings me nicely onto my next point, paperwork.

If you want to own a bike in India you are going to have to accept that you cannot get it in your name. Not unless you have a connection that most people don’t to get around the law or you have a very long visa. The government just don’t allow it. The downside to that is that you have to ride around with a bike that is not legally yours. But don’t worry, this is India, so there is always another solution…

Another downside is that you cannot buy a new one from a dealer and also anyone selling a newer bike whose name is on the paperwork will not sell it to you because they are the one responsible for any issues that arise from you riding the bike. If you get a speeding fine or the bike is in an accident you could just leave it there and the owner would have to pick up the pieces while you run off without a trace.

That’s also a positive about not being on the paperwork, no one is going to know who you are so you aren’t responsible for anything that happens. Hopefully you won’t need to worry if you are sensible on it.

So, what ends up happening is someone will buy the enfield new and have their name on the paperwork. They sell it but the next person does not change the name on the paperwork so when they come to sell it they do not care who buys it because they never officially owned it. And this is what you need to look for because it’s the only way really that you are going to be able to buy a bike.

Here is what you want in terms of paperwork:

Signed 29/30 forms – this allows an Indian national to register the bike in their name if they so wish when you sell it. This means that the bike holds more value if selling to a local. If selling to a foreigner this doesn’t matter too much as it’s of no concern to them but it helps you make a case for a higher price.

Registration Certificate (RC) – this is essential. You need this to prove who owns the bike and that it is legal, what the engine number, chassis number and registration plate are, etc. When stopped by the police you will want to show this to them.

Insurance – insurance, from what I could tell, is very cheap. I bought my bike with nearly 1 year left on the policy so I didn’t get it myself. It was 1,100 rupees for a year which was about £12 at the time of writing. Pretty cheap and good to show the cops if you get pulled over.

Road Tax – This is usually paid for at the beginning of the life of the bike and I believe that it lasts for 20 years so unless you are buying a really old bike it should still all be valid and paid for so nothing for you to worry about. Just check it out though, to see how much time is left on it.

Pollution under Control Certificate – this needs to be obtained in order to cross the border to Nepal. Cost was 100 rupees in 2014. If you have a word with them and say that you need it to pass then they should look after you, or pass them 200 instead of 100 and you shouldn’t have any issues…

International Driving License – You should really have one of these. It’s easy to get apparently, from your home country. You just apply for it and pay a little money. I didn’t have one and it cost me in other countries like Indonesia but it never caused a problem in India. Strictly speaking if you get pulled over by the Police you should have the international license.

Your Story to The Police

If you get pulled over by the Police you need to have your story straight. You need to say that you are BORROWING the bike, not renting, because rental bikes need to have yellow printed number plates on them and you shouldn’t be riding them too far out from the state that the bike is registered in. So you are borrowing it from a friend who is the owner. You are going to return it to them after a few weeks and you have all the paperwork. You do not have the number for the guy so he is not contactable by the police should they ask. If you are having any issues then a small bribe usually does the trick and you can get out of most situations by paying 200-500 rupees.

When you are riding along the road, if someone tries to stop you at any point and you can feasibly get away with not stopping by saying you didn’t see them just carry on as normal. Don’t speed off, just make it look like you didn’t notice them. The fewer questions the better and if you’re a foreigner any security or police will always try to get as much money out of you as possible. Best to not have that conversation or negotiation as you will always come off worse…

Price of a Royal Enfield in India

In 2014, when I was in India, the price of a royal enfield was very varied depending on where you purchased the bike from. I bought mine in Goa so it was expensive. I paid around $1,500 for a 2006 350cc Bullet. It was in great condition, came with all the paperwork, seemed like a good bike, had luggage racks, two helmets and some other bits and pieces.

I paid a little more than perhaps I should have but it seemed worth it. You can find them from 65,000 rupees up to 100,000 for similar bikes. Shop around and remember to negotiate as much as possible. Check the bike over, too. You don’t want a smoker or anything that looks run down with oil leaking out all over the place. You don’t need to be a mechanic to know that leaks, dents and signs of neglect are going to usually result in a lot of repair work.

I would always go for a 500 now. They are harder to find and apparently harder to work on. Fewer of them means that there are fewer spare parts and the new parts are harder to get and cost more. But the power is worth it…The 35o is really under powered for such a heavy bike. It’s not much faster in acceleration than a scooter. In truth, it doesn’t matter that much because you don’t want to be bombing around fast as the roads are not made for it but it’s nice to have a little blast when it’s appropriate.

The main reason you want a 500 though is if you’re going up any mountains and hilly, hard terrain. I found that out the hard way on the route up to Muktinath. It was mountainous, hilly and hard work for the bike. At times it barely made it up the hills.

The Trip so Far

So far into my trip I have ridden approximately 1,700km and have had no major issues. When I bought the bike I found it on a website called www.quickr.in which is a classified ads website like Gumtree or Craigslist for India.

It was a couple who were selling the bike and they had ridden it down from Nepal to Palolem in Goa. The bike was clean, looked good, well maintained, new tyres, well serviced with all the receipts and all the paperwork mentioned above in order. The oil was clean and sufficiently topped up, it didn’t blow smoke out of the exhaust when started and revving the engine so it was all good. It also started first time with just a small kick of the kickstart and had a front disc brake when quite often the Enfields tend to have a drum brake on the front so less stopping power.

A Final Word on Buying an Enfield in India

I finish by saying to all of those negative people on the forums that put me off doing it that they are wrong. So wrong. To anyone who reads this who is thinking about buying a Royal Enfield in India and riding it around the country to go for it. Just remember a few things about buying the bike and get someone who knows a little bit about bikes to check it over with you if you are really not sure. Also, don’t get too caught up in the moment and buy on impulse. There are loads of bikes available to buy from all over India so you will always be able to find another one.

If you have any questions please drop me a message in the comments below and I will do my best to help you out. The beauty of buying a royal enfield in India is that there are no hard and fast rules. Everything is possible, it’s not like Europe where you have to have everything in order with loads of rules and paperwork sorted.