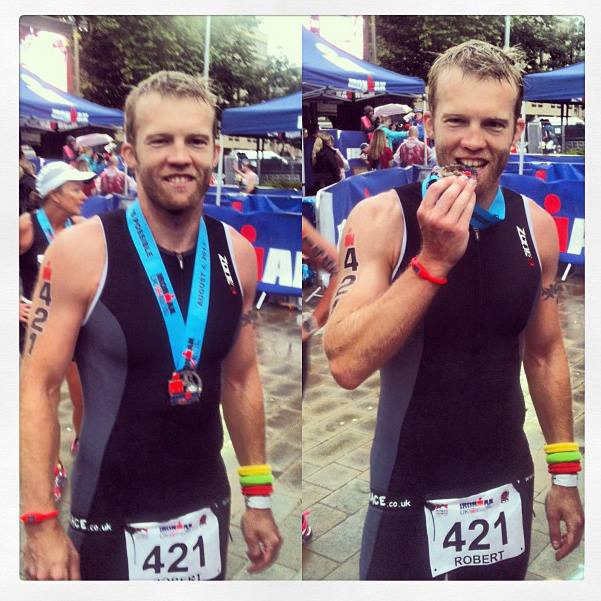 11 months after deciding to take on the Ironman UK triathlon, when I could not swim because I had a fear of putting my face in the water, I finally managed to complete the course in 12 hours 56 minutes. I was aiming for under 12 hours but I had no idea how hard it would be…

The journey I went through to get there was long and hard. There were many times when I did not want to train, especially on the cold and wet days when I needed to go out on the bike. Fortunately I managed to keep disciplined for most of the time and put in the hours I needed to.

All Play No Work

For the last month before the race on August 4th 2013, I was able to train full time because I finished my job. This gave me quite a large amount of time to organise myself and only go out when the weather was good on the bike. I was able to get 5 rides in which were over 150km so that was great preparation for the big day when I needed to ride 180km.

The biggest achievement for me was the swim because of where I had started from. Not only did I have to learn how to put my face in the water and swim front crawl in the pool, I had to learn how to swim in open water and that is a completely different skill. It took so much effort to get there, so many times when I hated going to swim but I got there in the end.

The skills I have learned in the water will always be there now but I still feel nervous when I go swimming. I want to keep swimming when I can and now when I’m away on holiday I can swim in the sea. Simple things that people take for granted, such as jumping into the water and snorkeling I was not able to do before. Now I can so these are actually life changing skills. It might even be a life saving skill if I ever find myself lost at sea…

I think I was all triathlon’d out after this because I only rode my bike once in the two months after my Ironman race! I sold it just a few weeks ago to someone who was planning on completing Ironman Wales in 2014 so hopefully it went to a good home. I want to take on some downhill mountain biking next.

I wrote quite a lot about the Ironman experience because I felt that I had a lot to share from my experiences going from an absolute beginner to Ironman within a year. I managed to write 5 articles totally over 8,000 words. It is getting published on the Beginner Triathlete website starting in November so I will post up the links to the articles on here as they become available.