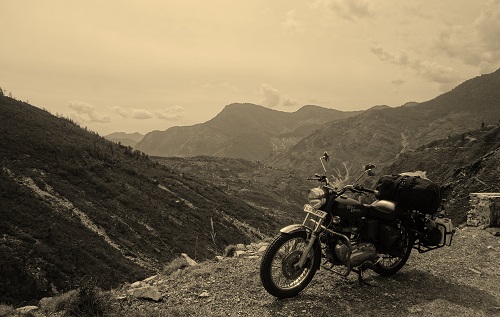 Crossing the India-Nepal Border by Motorbike

Are you thinking about crossing the border from India to Nepal? Maybe by motorbike?

Here’s my experience and some tips to help you cross it without any issues.

Oct 2019 Update: As shared by Dave and Michelle in the comments below from Sep 2019, when the crossed the border, here are their extensive notes:

My wife and I just crossed into Nepal. Here are my notes:

Quick passport check from another guard before India side of bridge

At 7:40am, I parked in front of Immigration check post (India) at end of bridge. USA Passport and visa details entered into log book and computer data base. Stamped out of India.

Nepal side in 500 meters approx.

Temporary Import of Motor Vehicle – Nepal Department of Customs office 200 meters beyond Nepal Immigration office. Arrived at 8:52 am. I offered to provide all motorcycle papers but only motorcycle registration car and California drivers licence (without motorcycle endorsement) was wanted and handed over. Office said maximum permit for Indian motorcycle is 30 days in one year. I requested a 21 day permit. Invoiced 3150 Nepal rupee. (eq $27.65 or $1.32 per day.) (No photo or pollution cert requested or provided to customs)

Paid fee at window across the courtyard (rear of office) with Indian Rupee.

Returned payment voucher to Customs window and given stamped voucher and permit to temporarily import the motorcycle.

Drove away at 9:07 am – no further checks or stops. No bags were inspected during the process.

Nepal is 15 minutes ahead of India and timing noted is local time my phone time updated during the process, I believe.

Feb 2018 Update: As shared in the “comments” below by Bart Brasser, the information in this post is still relevant. He managed to use Nepalese rupees at the border. The road tax was 649 Nepalese Rupee for 7 days.

Important: The Indian customs officer accepted just a photograph of the bike papers! But try to have the originals for extra certainty…

I hadn’t thought about heading into Nepal when I first bought my Royal Enfield Bullet in India, mainly because I had not even planned on buying a motorbike even when I arrived in India; it all happened spontaneously.

After I decided to visit Nepal on the motorbike after touring around India, I started to do some research.

I found various questions on forums and posts on blogs which discussed what you should do but I still was not 100% sure so I wanted to write out the details of what I did and how I did it.

2017 Update: I’m updating this when I can. There are plenty of comments below which I will add to the post as more info. becomes available.

Oct 2018 Update: Shishir mentioned in the comments below that upon arrival at the Sonauli border he only had the option to get a 20 day bike permit. He was told he could get it renewed in batches of 20 days in the Kathmandu customs office.

Note 2: It would be ideal if you had an international driving license, which you can get from your own country. I didn’t have one when I crossed and they didn’t ask for it.

You will also need to pay for road tax for the time you are there. When I went, you could only get 30 days at a time. The cost was around $70 I think. You have to pay it up-front, so make sure you have plenty of Dollars available.

If you need to stay for longer, you’ll have to go back to the border and renew the road tax certificate.

Thinking about buying a motorbike in India? Check out this post I wrote on it.

I crossed the border at Banbassa/Bhimdatta, which takes you to Mahendranagar in Nepal as the first town. This is where I stayed for the first night of my stay.

There are several hotels around. After crossing the border, I took the 2nd or 3rd turning on my left and found a hotel.

I had been up in the mountains before that in a place called Munsyari. The views were incredible and it was very isolated which is something that I was looking for.

It was over 70km to the nearest petrol station and ATM, so make sure you have supplies if you decide to visit any area up that way. 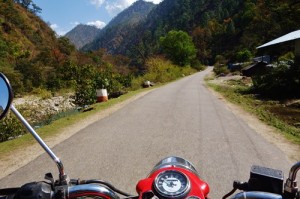 Cruising on the open road

Munsyari  I would highly recommend visiting if you are travelling around on your bike and have time.

I rode from there to the border in one day, but it took me 11.5 hours and it was tough riding with only 2 x 5 min breaks for water, no food.

The last 20km down to the border area or Banbassa are some of the best roads I have ridden on in India. They are smooth, very wide and when I came down on them around 3-4pm there were very few vehicles.

Anyway, I digress. I made my way to the border crossing at around 5.30pm. As you go over a bridge, turn left along a narrow part of a bridge and you will turn right at the end.

There is a very small immigration office there with some people sitting outside at a desk. It’s not well signposted at all. They will take your passport and stamp it and give you a form to fill in for the Nepalese Visa if you need one.

You have to ride about 1.5km after the Indian border crossing, where you cross a small bridge (again, there are no signs so ask if you’re not sure) where you will come to a barrier and be asked to head into the immigration office.

It’s a very small building and I totally missed it. There was no one there when I arrived at around 5.45pm.

I got my visa in 10 mins and changed up some money from dollars and Indian rupees into Nepalese rupees. Very quick and easy with no fuss.

I then had to visit the customs office which was another very small building but on the other side of the barrier. There was no one there and I walked in, sat down and got my road tax for 1 month.

They only asked to see the registration certificate but I gave them the pollution certificate as well. The bike was not in my name and they didn’t ask any questions about it but I had a story ready.

My story was that I had borrowed the bike from a friend, whose name is on the registration certificate and I was going to get a visa extension in Kathmandu and go back to India.

Where are you going afterwards…?

If you are planning to head back into India after visiting Nepal for a short while, do you have the correct Indian visa? You’ll need a multiple entry one. I think some visas on arrival are just single entry, in which case you might need to get another one when you go back to India.

If you’re looking for something fun to do in Nepal, check out a beautiful ride I did from Pokhara to Muktinath. It’s quite a rough ride so make sure you don’t do it alone!

The Poker Run is another great thing to do. It goes from Kathmandu to Pokhara.

Roads from Mahendranagar to Pokhara via Butwal

I was expecting it to take me a while to get from the border crossing down to Butwal area, which I wanted to stay near to because I wanted to visit Lumbini before heading up to Pokhara. However, the roads were so amazing and clear that I got to Butwal in one day. It’s around 400km.

The roads go through large forests which have quite a few police checkpoints along them. It’s no problem when going through the checkpoints as most of the time the police have no questions to ask. They are mainly interested in checking lorries which have larger loads in them.

You can cruise along the roads at good speed. I was sitting at 80kph for most of the time apart from when I needed to stop or slow down for checkpoints and turns…

There are very few cars along the road so it’s really nice to drive along this route. I hadn’t realised how much it hurts when a leaf hits you in the face at 80kph until this part of my journey!

The leaves which were pretty hard because they were dry and falling from the trees were falling like rain from the sky so avoiding them was very difficult.

I stayed in Butwal and planned to go to Lumbini the next day. I stayed at a hotel called Sindoor and it was pretty good. The staff were very helpful, but very relaxed and there was no rush to do anything.

I like them and then helped me out, especially with getting my iphone fixed that I broke on the way to Lumbini when I dropped it on the floor after asking for directions.

The area itself is massive. I read that it’s 5km by 2km in size and it certainly seems that way. There are no signs though, so finding what you are looking for is very difficult.

I was looking for the large golden temple. I spoke to a few people and they didn’t know where it was. I also spoke to a French guy who had been there for a day already and was staying inside of the park and he had not been able to find it either so I gave up and made my way back.

On the way I had one more look and stumbled upon the World Peace Pagoda. It was an impressive building with very few people around because it was in the middle of the day and it was extra hot.

I used Google, as I usually do, to find out the route to get to Lumbini. It took me down some nasty roads which were very dusty and with no road surface at all.

I was covered in dust and dirt by the time I arrived but on the plus side I had been riding through some small villages which were very nice and quiet.

I’d love to hear from anyone else who has had experience in crossing the border, good or bad. It would also really help to share so other people know what to expect.

I will update the post with information as it comes in.