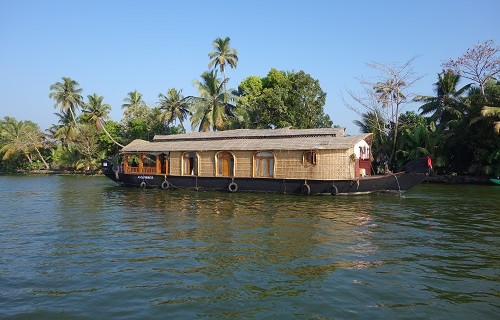 Alleppey is one of the areas known for backwater tours, which is located on the south west coast of India. Tourist, both domestic and foreign, travel to this water side haven in Kerala to escape the hustle and bustle of the city life, only to be faced with similar conditions on the waterways.

I have no idea when it started but over the past 10 years or so the number of people going to Kerala for a backwater excursion has certainly increased massively. Kollam, Alleppey and Cochin are all home to many house boats which will take you on anything from a day to multiday trip around the waterways. The boats are very impressive, some very large which must have 8-10 bedrooms with a dining area, kitchen and bathroom facilities, and some smaller but still having all the mod cons necessary to charge a good rate for a day outing. 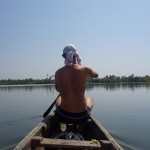 Open water and a canoe

From what I understand the backwater experience costs anything from 4,000 to 10,000 rupees per person (100 rupees to the pound) for 1 night on the water. That includes lunch, dinner and breakfast the next morning. It’s quite an expensive way to travel. I decided not to go ahead with the houseboat tour for a number of reasons, mainly because I was on my own and the cost of it. I instead decided to go on a different kind of backwater experience.

For 1,000 rupees (I think it could have got it much cheaper if I went directly to the canoe guy instead of through the hostel but I wasn’t to know) I had a full day of canoeing with one of India’s top stand up paddlers. His name was Rocha and he took us around the backwaters in his small, 3 man canoe. First up, we got a public ferry to his home in a small village which was about 45 minutes outside of Alleppey. The ferry ride was only 15 rupees each way and gave us a good taste of what a houseboat experience would be like. We saw hundreds of the houseboats while we were going along on the same routes as them.

I was on the trip with an Italian couple, Sofia and Jas. It was an early start, around 8am for the ferry, and then we started with breakfast at Rocha’s family home where his mother cooked us a fresh breakfast. After that we set out on the canoe.

We spent many hours canoeing through the small waterways that the large houseboats could not get down and we did not see one other tourist boat, or tourist, for the whole day. In fact, a lot of the time we just leisurely paddled past locals going about their daily routines 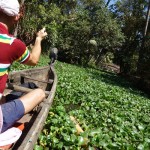 Making our way through the swamps…

such as washing their clothes and preparing meals. It was very calm and relaxed.

We tried some coconut beer which I have to say was disgusting! I hated it, but Jas seemed to like it so he had most of it. It sat in the boat a lot of the time and Sofia had to open it from time to time in order to let the gases out. This was right behind my chair and every time she did it I felt like I was going to heave because of the putrid smell.

I stayed in a place called Prince’s Guest House. I came across it quite strangely. I was riding down one of the main streets near the town centre when a guy pulled alongside me on a scooter and asked if I was looking for a guest house. It’s quite obvious that I am because I have all of my belongings attached to the bike and I’m usually riding slowly looking for guest house signs. I was a little skeptical at fist but I decided to go with him because he showed me a picture of the guest house on his business card and I’m glad I did.

The house was very new, modern, had high speed wi-fi, had large rooms and was cheap. I paid 400 rupees a night for a double room with attached bathroom. The guys running it, Dinesh and Richad, were very nice. A third guy worked there, his name was Jins. All three of them were nice and I got to know them a lot better over the course of the three days that I stayed there because I stayed in quite a lot using the wi-fi, catching up on some work and chatting with them. I bought some snacks and some beers on a couple of the nights and they got some rum so we had some drinks out on the roof terrace.

I met a couple of French guys who were there, an older English couple, a young couple (the guy was called Mario) and a Japanese student called Soskue (Sol for short). I got on pretty well with Sol and we spent a little time together before he left the following day on his way back home to Japan.

Buying alcohol was a funny experience because I was there on the 1st Feb. The 1st of Feb, in some places at least but I’m not sure if it’s all of India, is a dry day. Dry meaning no alcohol. Apparently it’s to prevent the men from buying lots of alcohol with their pay packets….But it means you cannot get alcohol. The next day I saw lots of people queuing up outside the two liquor stores from around 2pm…The queues only got bigger in the evening. Men were buying alcohol, stashing it in their clothes so that you could not see it and making their way home or wherever to drink it and save some of it for another day.