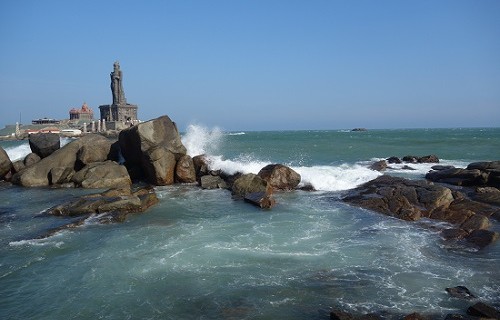 Kanyakumari is the southern most point of mainland India. I wanted to go here because I am a man who likes to accomplish things, be it the fastest, strongest or, as in this case, the furthest. I think that Man has learned a great deal by pushing boundaries and achieving goals which to some may seem pointless. Goals such as climbing the highest mountain, reaching the north pole, etc, fall into that category. I think it’s a good thing to want to achieve such goals.

When I arrived I was expecting something a little more grandiose than what I found. There is little more than a small town at this 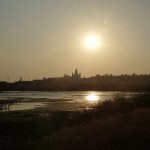 windswept part of India. Nestled between the main road and the shoreline are some hotels, some of which are very luxurious. There is one, I can’t remember the name, which has a 7th floor restaurant. I think it’s called something like sea shore view. It’s a very fancy place but is, apparently, the only place in town to have sea views from such a high vantage point for dinner. The views were great, the food very nice and the service very attentive.

I had two strong beers, a channa masala, one butter nan and one aloo parotha and some ice-cream. I can honestly say that I have never eaten so much before in my life and I hope to never eat that much again. I felt physically sick with fullness, to the point where I was actually a little sick in my mouth…Fine dining in style. 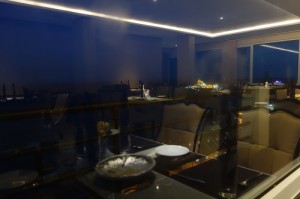 I stayed in a hotel called Tri Sea view, named because there are three seas which meet here; The Arabian, the Bay of Bengal and the Laccadive sea. It was a large hotel complex, with a swimming pool on the roof. I went to have a look but there was no one around. It amazes me how many plaes I go to in India where there are so many staff, around 5 in this case, doing absolutely nothing for the best part of the day. Labour is so cheap that they aren’t spending much by having the staff around doing nothing and it pays when they have a large number of guests I suppose. 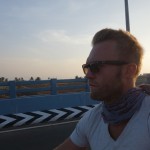 One thing that I love about having the bike is freedom that it gives me to ride around wherever I want to. I can ride out on a road for sunset and go to places that no one else is and explore around the local area. In this case I went up the coast about 5km and rode through a small village area. I rode over a large bridge from which I could see the sun reflecting off the water and the silhouette of a church in the distance which looked like an artists impression, painted in water colour.